Working Together with Africa and the Middle East

The Africa/Middle East regional area includes all African countries, the Arabian Peninsula, Israel and its neighbouring countries. The regional department represents the interests of the DFG vis-à-vis regional partner organisations and supports scientific cooperation between researchers from Germany and the region.

In addition to establishing and maintaining bilateral relations with strategic partners, the regional department is particularly involved in African science networks. 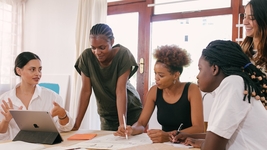 African-German Scientific Exchange in the Field of Public Health: Invitation to exchange ideas and establish networks

Two-step call of proposals invites researchers from sub-Saharan Africa and Germany in public health sciences to an exchange of ideas and the establishment of networks . Interner Linkmore 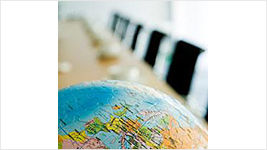 DFG Involved in the SGCI in Sub-Saharan Africa 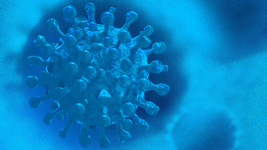 The pandemic has confronted everyone with extraordinary challenges. The German universities hosting TWAS-DFG fellows have been doing a tremendous job during the corona crisis. Interner Linkmore

The regional area at a glance

The Africa/Middle East regional department is concerned with creating and cultivating optimum framework conditions for cooperation between researchers from Germany and the Africa/Middle East region. Particular attention is paid to capacity building of science systems in the region. In this way, the DFG also supports early career researchers as an outstanding resource for Africa. In connection with Germany-related research biographies, fruitful relationships can be established in this way between the scientific communities in Africa and Germany.

In addition to providing information for researchers from Germany who are interested in cooperating with partners in the region, the regional department also provides advice in the event of the relevant enquiries from abroad.

Scientific cooperation opportunities in this heterogeneous and rapidly developing region are identified as early as possible and are initiated and supported together with partner organisations in the region.

Since 2010, the DFG, together with TWAS (The World Academy of Sciences for the Advancement of Science in Developing Countries), has funded up to 50 young researchers from Sub-Saharan Africa each year with a three-month stay at a research institution in Germany. Researchers from all disciplines can apply for up to five years after gaining their doctorate, provided they are pursuing research at an African institution.

The next application opportunity is expected in spring 2021.

Since 2008, the DFG has put out an annual call for proposals for “German-African Cooperation Projects in Infectiology”. The aim of funding here is to promote partnership-based research into neglected infectious diseases, including their social and societal effects. In addition to the intellectual balance of the projects, funding prerequisites also include sound concepts for the training of young researchers and the establishment of sustainable research opportunities in Africa. Project proposals are initially submitted as outlines; if an idea is promising, an invitation goes out for the submission of a full proposal. For funded projects, regular colloquia are held alternately in an African country and in Germany.

The call for the submission of new project outlines is issued annually in early summer in English, French, German and Portuguese. The next call for proposals will be issued on 3 June 2021.

The strategic funding programme “Programme Point Sud” was initiated in 2009 as a pilot project to promote humanities and social science research on Africa in Germany. The starting point for the activities is the research institution “Point Sud – Centre de recherche sur le savoir local” in Bamako, Mali, as well as the Point Sud network it has established, to which various other partner research institutions in African countries also belong. “Programme Point Sud” provides the framework for networking activities in the field of German Africa research between various partners in Africa, with a call for proposals being issued on an annual basis.

Special funding opportunities and programmes with Israel and the Middle East

The excellence programme German-Israeli Project Cooperation (DIP) was established in 1997 by the Federal Ministry of Education and Research (BMBF) to promote innovative German-Israeli cooperation projects in all academic fields.

The Science Granting Councils Initiative in Sub-Saharan Africa (SGCI) is an initiative founded in 2015 that aims to strengthen the participating science-funding organisations in Sub-Saharan Africa, currently 15 in number, through joint capacity building and coordinated funding activities. The aim is to support research and policy, thereby promoting the social and economic development of the region.

For several years now, the DFG has supported the SGCI in terms of content through lectures at SGCI annual meetings, scientific symposia and the organisation of science administration and science policy workshops. Since November 2019, the DFG has also been one of the SGCI’s funding bodies, supporting in particular the expansion of network-building measures to establish joint, regional calls for proposals for research project funding.

The Next Einstein Forum (NEF) has been established as a biennial pan-African forum and aims to have a regional impact by bringing together protagonists from academia, politics and society from almost all African countries to engage in dialogue. Here, science and research are positioned as key drivers of global development.

The DFG has worked closely with the NEF since the first NEF Global Gathering in 2016. Through its active member status on the Scientific Programme Committee and official partnerships, the DFG helps shape the NEF in terms of content and strategy. The former President of the DFG, Prof. Strohschneider, was actively involved in the NEF Global Gatherings programme in 2016 and 2018. Participation by DFG President Prof. Becker had to be cancelled in 2020 due to the COVID-19 pandemic. In addition, the DFG and its local partner organisations organised several official side events at the NEF Global Gatherings.

Since 2016, the DFG has been expanding networking between researchers in sub-Saharan Africa and Germany as part of a trilateral initiative with its partner organisations in Mozambique and Zambia. Initial subject-specific symposia brought together researchers from Mozambique, Zambia, Germany and other countries in southern Africa and resulted in co-financed bi- and trilateral project funding within the framework of joint calls for proposals.

Due to the growing interest in cooperation and pandemic-related restrictions, the format of this trilateral initiative has recently been adapted to the new realities of international cooperation. Now, two-step subject-specific calls invite researchers from all over sub-Saharan Africa and Germany to (1) submit posters. On a platform, they are then given the opportunity to familiarise themselves with the expertise and project ideas of the other participants on the basis of the posters, to network with each other and (2) subsequently to submit proposals for the initiation of international collaborations to the DFG. The aim is to promote networking and scientific exchange between researchers in sub-Saharan Africa and Germany in order to find possible interfaces for bi- or multilateral research collaborations and to foster their elaboration.

Israel and the Middle East: