The aim of the Excellence Strategy is to strengthen Germany’s position as an outstanding research hub in the long term and further improve its international competitiveness. It continues the development of German universities successfully begun with the Excellence Initiative by supporting research of the highest standard, enhancing research profiles, and facilitating cooperation in the research system. 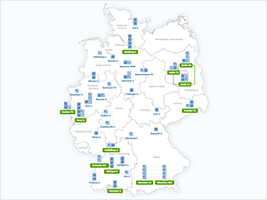 Information on the second competition phase

At the meeting on 29 – 30 November 2021, the Committee of Experts made key decisions on the second competition phase.

Based on the administrative agreement reached by the federal and state governments on 16 June 2016, the DFG and the German Council of Science and Humanities are implementing the Excellence Strategy in two funding lines:

The call for draft proposals for the second competition phase is expected to be issued in late 2022.

The Universities of Excellence funding line serves to strengthen universities as individual institutions or as university consortia in the long term and further develop their leading international role based on successful Clusters of Excellence. The German Council of Science and Humanities is responsible for developing and implementing this funding line. A total of approximately €148 million will be available annually. Final decisions were made by the Excellence Commission on 19 July 2019, at which time ten universities and one university consortium were selected. Funding commenced on 1 November 2019.

The next call for draft proposals for the second competition phase is expected to be issued in 2024.

Schedule for the Excellence Strategy 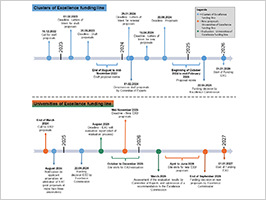 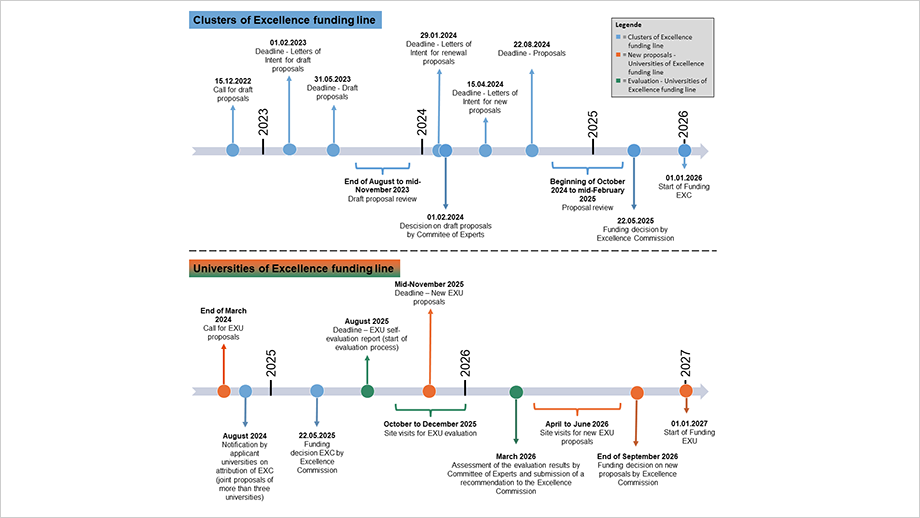 Schedule for the Excellence Strategy

On 29 – 30 November 2021, the Committee of Experts adopted an initial schedule for the second competition phase of the Excellence Strategy. The details are published subject to the proviso that it will be possible for the GWK to decide on the further development of the programme in autumn 2022.

We will provide further information along with all necessary forms and samples in connection with the call for proposals.

Further information on the Excellence Universities funding line can be found on the German Externer LinkCouncil of Science and Humanities website.

The Committee of Experts consists of 39 members with proven research track records who represent the entire range of academic disciplines. In addition, they have extensive experience in international settings, in university management, in teaching or in the private sector.

The Chair of the German Council of Science and Humanities and the President of the DFG are non-voting members of the committee and preside over it.

The tasks of the Committee of Experts include defining the funding conditions, evaluating the draft and full proposals on the basis of peer reviews, making funding recommendations to the Excellence Commission, deciding on the draft proposals that qualify for submission of a full proposal, and assessing the results of the evaluation of the Universities of Excellence.

On 27 and 28 September 2017 the Committee of Experts for the Excellence Strategy made its initial decisions in the Excellence Strategy. It chose Link auf PDF-Datei88 projects to proceed to the full proposal stage in the Clusters of Excellence funding line. The selection was made from 195 draft proposals, which were submitted to the DFG by 63 universities. The draft proposals were then reviewed by international panels on the basis of research quality criteria.

All 88 invited full proposals were received by the DFG by the 21 February 2018 deadline. They were submitted by 41 universities. Of these proposals, 26 were submitted jointly by at least two universities, including 3 by three universities. Just under half of the projects build on Clusters of Excellence or Graduate Schools that were funded during the previous round of Germany’s Excellence Initiative. The Clusters of Excellence and Graduate Schools that were funded under the Excellence Initiative but not continued under the Excellence Strategy received completion funding through the end of October 2019.

Additional facts and figures can be found in the articles/documents listed under Information Letters and Press Releases.

The DFG Infobrief "From Zero to Full Capacity? Personnel Expansion in Clusters of Excellence" summarises the socio-demographic data of the participating researchers collected as part of the DFG's annual monitoring and provides an overall view of the composition of the Clusters of Excellence according to career stage, gender, subject area as well as the internationality of the participating researchers.

The report “Exzellenzstrategie des Bundes und der Länder – Statistische Übersichten zu den Förderentscheidungen zu Exzellenzclustern (September 2018)” (Excellence Strategy of the Federal and State Governments – Statistical Overview of Funding Decisions on Clusters of Excellence) describes the draft and full proposal phase up to and including the funding decisions in the first competition round for the funding of new Clusters of Excellence. In addition to presenting key figures on the distribution of projects by region and discipline, the report examines topics such as the interdisciplinary nature of the Clusters and the composition of the review panels.

The infas Institute for Applied Social Sciences conducted an online survey of reviewers involved in the Excellence Strategy on behalf of the DFG to evaluate the programme’s review process. Two-thirds of reviewers responded to the survey, the results of which are presented in the report linked below.

On 29 and 30 April 2021, the DFG Head Office invited members of the Clusters of Excellence from the first funding round, representatives of the universities, as well as members of the Committee of Experts and the Joint Science Conference to a joint discussion forum on the framework conditions for excellent research in Germany. The event offered the opportunity to exchange different perspectives on the funding programme, from the proposal process to the day-to-day work of the Clusters. The article linked below provides further insights.

The following contact persons are available at the head office of the DFG:

For the Clusters of Excellence funding line

Contact persons for individual Clusters of Excellence and for administrative matters

Use of Funds for

The following contact persons are available at the head office of the German Council of Science and Humanities:

Information on the Excellence Strategy will be updated regularly on this site during the course of the programme. For direct access, use our quick link at