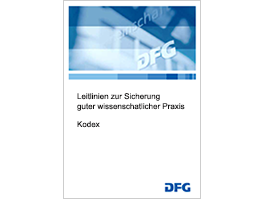 The DFG Code of Conduct “Guidelines for Safeguarding Good Research Practice” was approved on 3 July 2019 at the DFG’s General Assembly and entered into force on 1 August 2019. It replaces the existing white paper "Safeguarding Good Scientific Practice”, which was extensively reformed by a ten-person expert committee during the period from August 2018 to February 2019.

The aim of the Code is to enable the intended audience – researchers and heads of universities and non-university research institutions – to align their internal structures, processes and actions with the guidelines for good research practice. This is intended to create a deeply rooted culture of research integrity at higher education institutions, focusing less on breaches of good scientific practice and more on the professional ethics of researchers.

As of 1 August 2019, all universities and non-university research institutions will be required to implement the 19 guidelines in a legally binding manner to be eligible to receive DFG funding. For those universities and non-university research institutions that have already implemented the relevant requirements in the DFG white paper “Safeguarding Good Scientific Practice” in a binding manner, there is a two-year transition period for implementing the guidelines in the Code. This period begins on 1 August 2019 and ends on 31 July 2021. 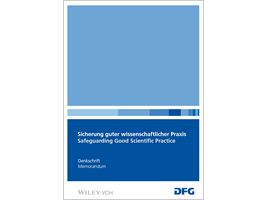 An amendment and update to the recommendations was approved by the DFG's General Assembly on 3 July 2013. 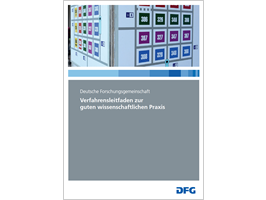 To whom do I turn with questions regarding good research practice, or in the case of suspected scientific misconduct? What does a typical investigation look like in such cases of suspicion? And what consequences can it have?

These and other questions are answered in the process guideline, which draws on the wide experience of the DFG and its Head Office in dealing with instances of suspected scientific misconduct in the past.

The two documents mentioned above can be ordered from the DFG Press and Public Relations Office, Michael Hönscheid (0228 885-2109 or Link auf E-Mailpresse@dfg.de).