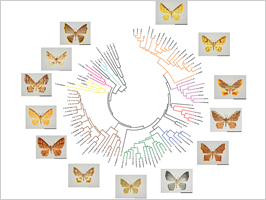 Biodiversity research is a relatively new interdisciplinary field of research that addresses research problems that can often only be solved by taking a long-term approach. The DFG has being funding a number of individual projects in the field for some time, in addition to a number of large-scale research groups that are embedded in the “biodiversity exploratoria” research platform. Biodiversity research aims to fulfil the obligation that Germany agreed to when it signed the Convention on Biological Diversity (CBD).

This commission, which was established by the DFG Senate six years ago, aims to give the field the opportunity to organise itself and find solutions for pressing issues in the field. The commission’s primary objectives are:

The Senate Commission on Oceanography planned and coordinated the activities of the DFG in the field of marine research from 1959 until 2017. Most notably, it advised on matters pertaining to the research vessels METEOR and (from 2006 onwards) MARIA S. MERIAN, which are co-funded by the DFG. The focus was on the review process and evaluation of proposed voyages for these two ships. The Senate Commission on Oceanography was also the national German committee for matters of the Scientific Committee on Oceanic Research (SCOR) of the International Council for Science (ICSU), a role that was transferred to the Senate Commission on Earth System Research at the end of 2017.

The Expert Research Vessel Panel (GPF) appointed by the BMBF and DFG, which is responsible for the review process for proposed voyages for all global, oceanic and regional German research vessels within the framework of a joint procedure developed by the BMBF, DFG and HGF, was constituted on 7 March 2018 and thus took on this task concerning METEOR and MARIA S. MERIAN from the Senate Commission on Oceanography. More information on the new review process can be found on the German Research Vessels Portal.

The Senate Commission on Water Research provides advice on the DFG's funding programmes, promotes interdisciplinary and international collaboration, advises on core work areas and developmental trends, and supports coordination activities with other funding organisations active in the field of water research.

An important task of the commission is to help the interdisciplinary field of water research organise itself by enhancing communication between scientists and individual research areas.

The commission’s primary objective is to advance basic research in this field. In addition, it also supports the transfer of basic research findings to applied science with the goal of creating practical models to help solve national and global challenges.

The Senate Commission on Future Directions in Geoscience advises the DFG’s statutory bodies on questions of geoscientific research. It is responsible for coordination and strategic planning, while also being a link between the DFG, universities and non-university research institutions, as well as individual researchers in geoscience.

The appointment of the Senate Commission on Agroecosystem Research in 2012 focused attention on two topical subjects, “Increasing productivity per unit area while protecting natural resources and preserving ecosystem services” and “Research infrastructures: analysis and further development of basic institutional conditions that enhance the international visibility of agroecosystem research in Germany”. By focusing on these topics, the Senate Commission aims to be able to propose measures and initiatives to position and further develop basic agricultural research in Germany.