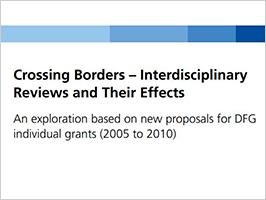 The report considers the aspect of 'interdisciplinarity' when decisions are made on proposals submitted to the DFG. It was commissioned by the Senate Committee on Strategic Planning.

The term 'interdisciplinarity' is generally used to describe the situation in which representatives of different disciplines work together on research. The term 'research discipline' has numerous meanings. It is not possible to define the core of a discipline unambiguously. Therefore, it follows that the limits and transitions between disciplines cannot be characterised either. In each instance when empirical access to a subject is required, a new examination must be made of the data and its suitability for a sufficiently robust treatment.

In this study, empirical access to the subject was provided by the analysis of reviews of approximately 20,000 new proposals for individual grants submitted to the DFG on which decisions were made from 2005-2010. The disciplines with which the reviewers were associated were evaluated on the basis of the DFG's classification system, distinguishing between 48 different subject areas.