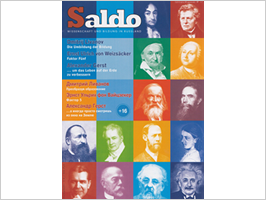 (27.01.15) A special edition of the bilingual journal Saldo was published at the end of December 2014, as the EU-Russia Year of Science drew to a close. This was the second issue since 2012 to be dedicated fully to science and the humanities and education in Russia and, prompted by current political developments, to take as its subject the role of intermediary assumed by the German representatives of science who live there. The German Research Foundation contributed numerous articles on the bilateral collaborations it funds and also an interview with the DFG President, Professor Peter Strohschneider.

Germany has traditionally been one of Russia's most important partners in international cooperation, possibly even the most significant in the area of science and the humanities and research. However, said DFG President Peter Strohschneider, doubt has been cast on their joint activities by the crisis in the Ukraine and there was still uncertainty about how the political upheaval would affect cooperation on research. Nevertheless, this special issue of Saldo, which usually has a stronger focus on economic issues, demonstrates that the relationships within science have a long history and that particularly in politically difficult times they could help to build bridges.

An example is the close collaboration on engineering sciences between the University of Stuttgart and the Khristianovich Institute of Theoretical and Applied Mechanics (ITAM) in Novosibirsk, which has been in existence for over 20 years. With funding from the DFG Research Training Group RTG 1095, a German-Russian team has been established which has made a very crucial contribution in the area of scramjet propulsion systems. Alexander Gerst, who was once funded by the DFG and who in 2014 became the third German astronaut to go into space, where he carried out a number of experiments jointly with a Russian and an American, also spoke about joint research in aerospace and in the life sciences and earth sciences.

The first German-Russian Research Training Group in the humanities (RTG 1956), which was established in 2014, is further evidence that the DFG plans to continue to support collaboration between researchers in the two countries. For example, the University of Freiburg and the Russian State University for the Humanities in Moscow (RGGU) are collaborating in an International Research Training Group which investigates German-Russian contacts in a European context under the very topical headings of "cultural transfer" and "cultural identity" and hopes to receive funding from the DFG for up to nine years.

Since 2007, Saldo has been published up to 4 times annually in German and in Russian. It has from 60 to 90 pages, a circulation of up to 7,000 and offers interviews with people from the worlds of the business, science and politics, contributions from experts and journalistic comment. Saldo's mission is to act as an independent platform for information, offering reports on key themes and insight into the political and social relationships and interaction between Germany, Russian and Europe.