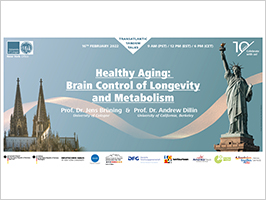 (02/24/22) Together with the DFG’s North America Office and the German House of Science and Innovation (DWIH) New York, the University of Cologne's New York office hosted the sixth installment of the "Transatlantic Tandem Talks" series on February 16. With scientific panel discussions, the series highlights solutions from research on important societal problems on both sides of the Atlantic.

This time, the focus of the event was "Healthy Aging: Brain Control of Longevity and Metabolism," highlighting the work of the DFG-funded Cluster of Excellence Cellular Stress Responses in Aging-Associated Diseases (CECAD) at the University of Cologne and the Max Planck Institute for the Biology of Aging. The two panelists discussed which cells are responsible for the body's decline and how loss of control is communicated within the cellular system, how the central nervous system regulates food intake, and how it affects energy availability in the body. Demographic change is bringing these questions into increasing focus as age-related and neurodegenerative diseases such as Alzheimer's, Parkinson's, and diabetes mellitus, place an increasing burden on healthcare systems.

Dr. Jens Brüning, Director of the Max Planck Institute for Metabolic Research and Director at the Polyclinic for Endocrinology, Diabetes and Preventive Medicine at the University Hospital, both in Cologne, is working to get closer to the answers to these questions. The Leibniz Prize recipient and research group leader at the CECAD-Cluster conducts research on the regulation of energy and glucose metabolism, which is dependent on the central nervous system. At the Transatlantic Tandem Talk, he presented his research findings on insulin action in the central nervous system, saying it “plays a previously unrecognized role in controlling blood glucose regulation and insulin sensitivity in the body.” His research team was able to identify specific neurons in the hypothalamus as significant mediators of the metabolic action of insulin and to highlight the changes in molecular mechanisms in these neurons in obesity. This could lead to significant advances in the prevention and treatment of diabetes mellitus.

Dr. Andrew Dillin, Professor of Genetics, Genomics and Development and Research Scientist at the Howard Hughes Medical Institute of the University of California, Berkeley was invited as a transatlantic tandem partner. The two scientists have been working together at the intersection of their disciplines for 15 years. Dr. Dillin studies why an aging organism begins to lose control of protein balance and how this loss is passed on in different tissues. In model systems, his team has been able to observe the effects of single disturbances of signaling pathways or proteins on the physiology of an entire organism. For example, they discovered that mice did not gain weight once their sense of smell was turned off, despite a substantial increase in caloric intake due to a high-fat diet. Dr. Dillin's award-winning research is another step toward gaining important new insights into developmental processes of neurodegenerative diseases such as Alzheimer's, Huntington's and Parkinson's.

The approximately 300 guests came from a wide range of academic, cultural, and economic institutions. The two presentations provided exciting insights into a successful example of international cooperation in cutting-edge research. The subsequent discussion underlined the topicality of research on longevity and emphasized the value of combining diverse approaches in biological aging science. The tenor of the event was that the translation of results into therapeutic applications still takes time. Nevertheless, the overall message was that the increasing understanding of molecular mechanisms of the aging process could contribute in the long term to the development of new preventive and treatment options leading to healthier lifestyles for the elderly and the sick, and ultimately for all of us.