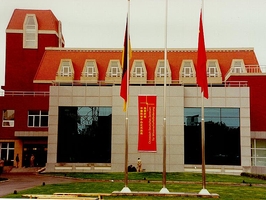 The Sino-German Center for Research Promotion (SGC) is a research funding institution based in Beijing, established as a joint venture by the Deutsche Forschungsgemeinschaft (German Research Foundation, DFG) and the National Natural Science Foundation of China (NSFC).

The SGC is tasked with promoting scientific cooperation between Germany and China with a focus on the natural sciences, life sciences, engineering sciences and management sciences. Its is used to support a range of funding programmes tailored to this purpose.

In addition, the Center serves as an information platform, works to improve the infrastructure framework for scientific cooperation between Germany and China, facilitates the exchange of information about the research system in each country, and provides bilateral early career support. In this way it makes an important contribution to long-term cooperation between universities, research institutions and researchers in both countries.

The guidelines for the SGC's activities are laid down by a joint committee of four Chinese and four German members appointed by the NSFC and the DFG respectively.
The work of the Center is managed by the internal board and the SGC handles research proposals in cooperation with the DFG and the NSFC. The German side of the SGC also represents the DFG as a local point of contact in China for individual researchers and various partner organisations.