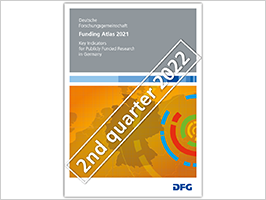 The German edition of the Funding Atlas 2021 is due to be published on 5 October 2021. The DFG Funding Atlas, which comes out every three years, presents a comprehensive, detailed breakdown of the key figures relating to publicly funded research in Germany.

The English version is expected to come out in Q2 2022.

With its finely differentiated analyses, the DFG Funding Atlas is the standard source of reference on the success of German higher education institutions in attracting third-party funding, so it is more than simply a university ranking. The DFG Funding Atlas provides information on the institutions’ success in attracting third-party funding not only through the DFG but also direct R&D funding by the federal government as well as under the Horizon 2020 programme – both overall and differentiated according to individual disciplines and funding areas. In connection with DFG approvals, consideration is also given to relative staffing numbers, and analyses are drawn up which take account of the specific subject profile of HEIs (“third party funding adjusted for subject structure”)

The year 2020 was the 100th anniversary of the founding of the DFG, which was originally known as the “Notgemeinschaft der Deutschen Wissenschaft”. The DFG has taken this anniversary as an opportunity to take a closer look at its own history, in particular in the form of the GEPRIS Historisch database, published in December 2020, which makes it possible to search master data for the years 1921 to 1945 on no less than 50,000 proposals involving some 13,000 researchers (very few of whom were women at that time, cf. Externer Linkhttps://gepris-historisch.dfg.de/). As such, the system enables users to trace the history of the DFG during those years, a period which included several upheavals. In the latest Funding Atlas, the data from GEPRIS Historisch is used to assess the stability of the research landscape, not just in recent years but also over an extended period of time.

The second historical theme is of more recent relevance – namely German reunification, the 30th anniversary of which was in October 2020. The Alliance of Science Organisations took this anniversary as an opportunity to address the challenges that were and still are involved in the development of a common research landscape, initiated in 1990 under the motto “30 Years of Unified Research”. Prompted by this anniversary, the Funding Atlas presents a review and an empirical investigation, initially drawing on previous editions of the Funding Atlas to trace the positions of eastern German HEIs in the DFG ranking. This is followed by an analysis of the extent to which researchers in the 16 federal states are currently receiving funding under DFG programmes that involve cooperation across federal state borders, i.e. those who are conducting “unified research” in the truest sense of the word.

Regional profiles and their representation in the form of maps have always been an integral part of the analysis in the Atlas series. By looking at large-scale structures in the form of so-called “spatial planning regions”, it is possible to discern regional priorities, as well as the degree of networking between German research institutions and universities.

The print and online versions of the report are supplemented with an extensive range of tables (in XLS format) so that users can process and use the key figures contained in the DFG Funding Atlas for their own purposes. Furthermore, key figures for more than 80 HEIs are presented individually and can be displayed in summarised form using the HEI view function. Meanwhile interactive map views specially developed for the new Funding Atlas allow users to view publicly funded research in individual federal states and regions based on specific optional selection criteria.

This report and the information offered online were produced with the kind support of the Stifterverband.