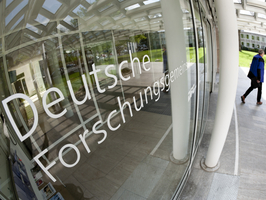 On 22 October 2003, the DFG signed the Berlin Declaration on Open Access to Knowledge in the Sciences and Humanities, signalling its commitment to supporting exchange in research by promoting freely accessible online electronic resources.

In spring 2016, the DFG signed the Expression of Interest of the OA2020 initiative. OA2020 was launched as a global initiative by the Max Planck Society in 2015. Since then, it has been supported by a growing number of researchers, libraries, institutions and organisations. Its aim is to accelerate the transition to open access by converting scientific journals which have previously been behind a paywall to open access. The money currently spent on subscriptions to journals should be reallocated towards funding the costs of open access publication models. The DFG supports the initiative through the establishment of the National Contact Point Open Access OA2020.de along with other organisations which form part of the Alliance.

In 2018, the DFG published a strategy paper on “Funding Information Infrastructures for Research”. The strategy paper reflects on the structural framework conditions of DFG funding activities in the field of scientific information infrastructures and explores the current need for changes in this area. The strategy paper also includes an in-depth examination of the transition to open access, one of the funding areas where the DFG identified the biggest need for action in 2018. With regard to the transition to open access, the DFG saw the greatest need for action in the areas of funding publication fees, open access monitoring within the DFG and further development of open access funding guidelines. Concrete measures have been formulated for all three topics, which are now being implemented.

The DFG welcomes the coordinated approach among funding organisations towards the realisation of open access. The DFG’s current strategy regarding open access places great emphasis on the role of the research community in shaping the transition to open access. It surmises that open access mandates can lead to increased article processing charges (APC), an effect that the DFG strives to minimise. Moreover, the obligations formulated in Plan S require fundamental changes to the evaluation system by which performance is measured by research organisations. A shift away from indicators such as the journal impact factor is necessary in particular; a lot of work is still to be done in this respect and DFG is committed to this topic. The DFG is supporter of cOAlition S, but has not adopted Plan S.

The “Action Plan for Diamond Open Access” published on 3 March 2022 is an initiative run by Science Europe, the cOAlition S, OPERAS (a European infrastructure for open science communication in the social sciences and humanities) and the French funding organisation Agence nationale de la recherche (ANR). The Action Plan sets out four priorities that are in line with the DFG’s commitment to open access:

The DFG supports the Action Plan and participates in the international Diamond Open Access community to coordinate activities in support of demand-driven and science-led publishing in open access without profit interests.

Academic publishing faces a number of challenges that can have a negative impact on science and the humanities. In particular, research assessment based on metrics can provide problematic incentives, thereby preventing the system of academic publication and research as a whole from developing in a way that is appropriate to its purpose. As a contribution to critical debate and with a view to rectifying developments, the Deutsche Forschungsgemeinschaft (DFG, German Research Foundation) has published a position paper entitled “Academic Publishing as a Foundation and Area of Leverage for Research Assessment: Challenges and Fields of Action”.