President of the Stifterverband 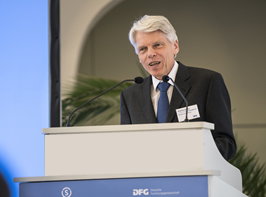 Andreas Barner has been the president of the Stifterverband (Donors’ Association for the Promotion of Sciences and Humanities in Germany) since 2013. From 2012 to 2016 he was chairman of the Board of Managing Directors at Boehringer Ingelheim GmbH, where he was responsible for human resources, research & development and medicine. He joined Boehringer Ingelheim’s Shareholders’ Committee in 2016.

Andreas Barner studied medicine at the University of Freiburg and mathematics at ETH Zurich, where he obtained his doctorates (Dr. med. and Dr. sc. math.). After a period as an assistant professor at ETH Zurich he joined Ciba-Geigy AG in Basel, where most recently he was in charge of drug development for inflammatory, bone and allergic diseases.

In 1992 he joined Boehringer Ingelheim GmbH, becoming a member of the Board of Managing Directors in 1999. In June 2008 he was awarded the title of professor by the Federal President of Austria.

Andreas Barner is equally at home in business and in the world of research. In 2007 he was appointed to the German Council of Science and Humanities by Germany’s Federal President. He is a member of the Executive Board of the Federation of German Industry (BDI), a member of the Senate of the Max Planck Society and the Helmholtz Association, and chairman of the High-Tech Forum, the advisory body on innovation policy for Germany’s High-Tech Strategy 2020. He is also a member of the Executive Committee of the German Protestant Church Congress.