African-German Scientific Exchange in the Field of Public Health: 154 posters from 24 countries

In the two-step call for proposals, 154 from 24 countries were admitted. Public health researchers from Sub-Saharan Africa and Germany interested in international collaborations are now exploring options for cooperation. 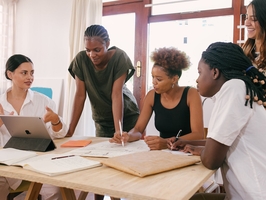 (06.12.21) While scientific exchange and networking between researchers from Sub-Saharan Africa and Germany have in the past primarily taken place in the context of physical meetings at conferences and workshops, the DFG and its partner organisations in the region have had to find ways to adapt joint networking activities to the new realities of international cooperation since the beginning of the pandemic. However, due to unstable internet connections and insufficient bandwidths, events planned in presence could not simply be transferred to virtual formats.

Joint considerations on solutions that are largely independent from technical requirements and travel restrictions led to the publication of a two-step call for proposals for the networking of researchers from Sub-Saharan Africa and Germany in public health sciences. In a first step, the call invites researchers to submit posters and, at a later stage, to submit proposals for the initiation of international collaboration to the DFG.

Until 30 September 2021, public health researchers from all over Sub-Saharan Africa and Germany could submit posters that present their expertise and outline potential interfaces for collaborative projects. A total of 154 posters from 23 Sub-Saharan African countries plus Germany were admitted and are now available on a platform for participants to exchange ideas on communicable and non-communicable diseases as well as health systems research based on the posters and to identify possible interfaces for bilateral or multilateral research collaborations.

Once ideas for joint projects have been identified, the newly formed Sub-Saharan African-German research teams can submit proposals for the initiation of international collaborations to the DFG by 28 February 2022. The self-organised and asynchronous networking on the poster platform thus leads directly into an established funding programme of the DFG. This integrated roadmap will be enriched by a status workshop, which will take place in Bonn/Germany in March 2023 and will convene all funded research teams as well as the respective African partner organisations of the DFG.