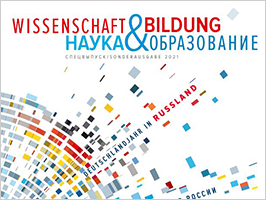 (21.10.21) This year’s special supplement issued by the bilingual Moscow German Newspaper (MDZ) on German-Russian cooperation in the field of research and education was published in October 2021. The publication offers locally-based German research, funding and intermediary organisations the opportunity to report on their activities in Russia.

The central theme of the latest issue is the current “Year of Germany in Russia 2020/2021” under the patronage of Federal President Frank-Walter Steinmeier, a joint initiative organised by the German Embassy in Moscow and the German Consulates General in Russia. The Year of Germany is supported by the Federal Foreign Office, the Goethe-Institut in Russia and the German-Russian Chambers of Commerce Abroad. The German Centre for Research and Innovation (DWIH) in Moscow and its sponsors such as the DFG see the year as having been a success overall: a wide range of events and projects has taken place despite the ongoing pandemic, organised by German research institutions with the involvement of their Russian partners.

In its own report, the DFG also notes that although the anniversary celebrations for its 100th anniversary did not go ahead as planned due to the limitations imposed as a result of the pandemic, funding of bilateral collaborative research ventures has nonetheless continued as usual. In addition, it was possible to maintain the German-Russian Young Researcher Weeks as an online event series – something that has now become established as a permanent fixture in bilateral cooperation between our countries. And the fact that so many Russian researchers were involved in the DFG’s “Because Research Matters” campaign was also very gratifying, as illustrated by the numerous quotations that appear in the article. This once again demonstrates the ongoing mutual interest in cooperation – which is why the outlook for the future of bilateral academic relations is positive in spite of the coronavirus!