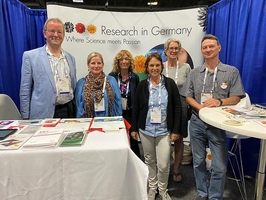 (06/27/22) After a pandemic-related hiatus, ASM Microbe 2022 brought microbiologists from around the world to Washington, D.C. From June 10-12, the DFG and partners provided information on funding and research opportunities in Germany at the "Research in Germany" information booth.

The joy over the success of the in-person event was palpable when the annual meeting of the American Society for Microbiology (ASM) was ceremoniously opened on June 9. Highlights of the Opening Session included a tribute to John Mekalanos (Harvard Medical School) and a talk by Yasmine Belkaid (National Institute of Allergy and Infectious Diseases) on "Microbiome Control of Host Immunity." Subsequent sessions - held subsequently through June 13 and which could also be attended virtually - covered seven different scientific tracks, ranging from "Antimicrobial Agents and Resistance" to "Clinical Infections and Vaccines" and "Host Microbe Biology." 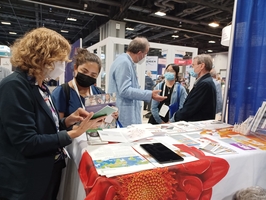 Nearly 5,000 participants traveled to Washington, D.C., to attend the meeting and trade show, one of the largest and most important conferences in microbiology. The "Research in Germany" campaign, funded by the German Federal Ministry of Education and Research (BMBF), was one of more than 140 exhibitors at the Walter E. Washington Convention Center. It was the fifth appearance at ASM for the initiative. Representatives from the DFG headquarters in Bonn, the DFG office in Washington, and the German Academic Exchange Service (DAAD) were available for consultations. A large number of the questions were about funding for postdoctoral positions, but there were also many questions about studies, doctoral studies and opportunities for cooperation. About 200 microbiologists were given detailed advice on research and funding opportunities in Germany in extensive one-on-one meetings during the three exhibition days.