(19.09.16) On 1 December 2016, a special event will be held to mark the 10th anniversary of the cooperation between the Fundação de Amparo à Pesquisa do Estado de São Paulo (FAPESP) and the Deutsche Forschungsgemeinschaft (DFG, German Research Foundation). The event was originally scheduled to take place the end of September. Prof. Dr. Frank Allgöwer, head of the Institute for Systems Theory and Automatic Control at the University of Stuttgart and Vice President of the DFG, will deliver a Leibniz Lecture entitled “Autonomous Cars, Smart Energy Distribution and Industry 4.0: Towards the New Cybernetics of the 21st Century” during the anniversary celebrations. In addition to the Leibniz Lecture, there will be presentations of jointly funded projects being conducted by German and Brazilian researchers.

The Gottfried Wilhelm Leibniz Prize is the most important research funding award in Germany. Worth up to €2.5 million, it is awarded annually by the DFG to outstanding researchers.

The Leibniz Lectures serve as a format for scientific exchange and dialogue between the prizewinners and researchers from all over the world, as well as interested members of the public.

About the Leibniz Lecture by Prof. Frank Allgöwer

“Autonomous Cars, Smart Energy Distribution and Industry 4.0: Towards the New Cybernetics of the 21st Century”

Cybernetics, the science of controlling machines, living organisms and social organisations, was the essential basis for technological progress in the second half of the last century. New technological challenges such as self-driving cars on intelligent motorways, intelligent energy distribution via smart grids, swarm robotics, life in smart cities and Industry 4.0 as a new paradigm in industrial production demand new types of cybernetic systems and control theory which go beyond traditional concepts. Starting with feedback concepts and their importance in nature and technology, the lecture will highlight new developments and challenges in connection with the control of linked networks in complex systems. 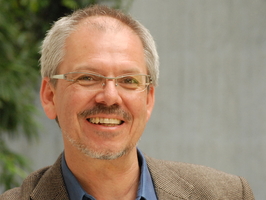 Frank Allgöwer is a specialist in non-linear systems and control theory; he won the Gottfried Wilhelm Leibniz Prize in 2004.

His core research area lies in the control of technical systems, which are now highly complex and dynamic, such as energy supply networks, the Internet and traffic systems. He develops methods to analyse and influence these systems, and his work has made important contributions to progress in this field. One example is the method of non-linear predictive control, which allows the future behaviour of a system in which you are intervening to be predicted, rather like a chess player who always thinks several moves ahead. This approach was the first to combine theoretical rigour with practical applicability, with the result that the method has found its way into industrial use, for example in the chemical industry and in biotechnology. Allgöwer also played a pioneering role in determining the strength of non-linearities. Today, the approach he developed is generally accepted as the standard.

Frank Allgöwer is the director of the Institute for Systems Theory and Automatic Control and a professor in the Faculty of Mechanical Engineering at the University of Stuttgart. He studied Technical Cybernetics and Applied Mathematics at the University of Stuttgart and the University of California, Los Angeles (UCLA). He received his doctorate in process engineering from the University of Stuttgart. Before taking up his current post, he was a professor in the Faculty of Electrical Engineering at ETH Zurich. Throughout his career he has also made several extended visits abroad to research institutions and companies in the USA. Frank Allgöwer’s main research and teaching interests lie in systems theory and automatic control, with a focus on developing new methods for the analysis and control of non-linear systems. He is a member of numerous German and international learned societies, the author of over 150 scientific articles and is involved in editing many journals. In 2012 Frank Allgöwer became Vice President of the DFG.

Date and time of event

For more information about the cooperation between FAPESP and the DFG, please refer to ‘Brazil’ in the list of worldwide partner organisations:

Information about the Gottfried Wilhelm Leibniz Prize is available on the DFG website: