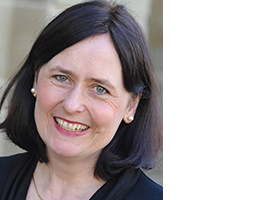 The Deutsche Forschungsgemeinschaft (DFG, German Research Foundation) has elected its first female president. On 3 July 2019, biochemist and medical scientist Prof. Dr. Katja Becker from Justus Liebig University Giessen was elected by the DFG’s General Assembly in Rostock as the first female researcher to head Germany’s largest research funding organisation and the central self-governing body of the German research community. Becker has served as DFG Vice President since 2014 and will take office on 1 January 2020 for an initial term of four years. She succeeds German medievalist Prof. Dr. Peter Strohschneider, who has served as President of the DFG since 2013 and will leave office at the end of his second term.

The General Assembly of the DFG elected Katja Becker from a pool of three candidates, which also included engineering scientist and process engineer Prof. Dr.-Ing. Wolfgang Marquardt from Forschungszentrum Jülich and theoretical computer scientist Prof. Dr. Dorothea Wagner from the Karlsruhe Institute of Technology (KIT). All three candidates were nominated to the member organisations of the DFG in April by the selection committee.

The future DFG President is 54 years old and has extensive experience in research, academic self-governance and policy advice. Katja Becker was born on 7 March 1965 in Heidelberg. In 1984 she began studying medicine at Heidelberg University, where she earned her doctorate in 1991 and completed her habilitation in biochemistry in 1996. In parallel to her research work, which included stays at Heidelberg University’s Biochemistry Center and the University of Sydney, Becker continued her clinical and physician’s training, working in Basel (Switzerland), Oxford (UK) and Nigeria and at the Heidelberg University Children’s Hospital, and passing her specialist examinations in 1998. After working as an associate professor in Heidelberg and as the leader of an independent junior research group at the Research Center for Infectious Diseases at the University of Würzburg, in 2000 Becker was appointed Professor of Biochemistry and Molecular Biology in Giessen, a position she still holds today.

Between 2009 and 2012, Becker served as Vice President of Research and Early Career Support at Giessen University, having previously been spokesperson of the university’s Interdisciplinary Research Centre in 2004/2005. She completed a research sabbatical at Scripps Research in La Jolla, California. Her research interests include cellular thiol metabolism, the structure and function of redox-active proteins and rational drug development for tumours and infectious diseases, particularly tropical malaria. She has received multiple awards for her work, including the Carus Medal from the German National Academy of Sciences Leopoldina and the Rudolf Leuckart Medal from the German Society for Parasitology.

Katja Becker has been closely associated with the DFG as a funded researcher, for example as the current spokesperson for the DFG Priority Programme “Dynamics of Thiol-Based Redox Switches in Cellular Physiology”. Since 2014 she has also been involved in senior bodies of the DFG, as Vice President and the chair of the Permanent Senate Commission on Genetic Research. Among other activities, she played a key role in formulating a statement on the opportunities and limitations of genome editing, published by the DFG, the German National Academy of Sciences Leopoldina and acatech – National Academy of Science and Engineering, and in discussions spearheaded by the DFG, Leopoldina and the German Ethics Council on a new definition of genetic engineering. Under Becker’s leadership, the Senate Commission prepared a document appraising the current situation in synthetic biology and engaged with the recent statement by the Ethics Council on interventions in the human germline.

On the DFG’s Executive Committee, Becker has been involved in discussions on modern research infrastructures in the life sciences, the harmonisation of the Animal Welfare Act and the expansion of scientific cooperation with India. She has also served as chair of the jury for the Eugen and Ilse Seibold Prize, which honours outstanding examples of German-Japanese cooperation in research.

Becker is actively involved in the research system as a member of several learned societies and academies, among them the Leopoldina, the German Society for Tropical Medicine and Global Health, and the International Society for Free Radical Research. Her special interest in professional dialogue between researchers and policymakers is also demonstrated by her involvement in the statements issued by the Leopoldina on Neglected Tropical Diseases for the G7 summit in 2015 and Improving Global Health for the G20 summit in 2017.

A photo of the future DFG President is available on the DFG website at:

Together with DFG President Peter Strohschneider, Katja Becker will attend the DFG’s 2019 press conference on 4 July at 9 am at WissenschaftsForum, Markgrafenstr. 37, 10117 Berlin. Late registrations for media representatives can still be made by
contacting Link auf E-Mailpresse@dfg.de.