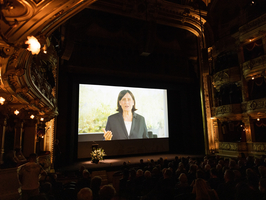 Video message from DFG President Katja Becker during the NCN celebration event at the Juliusz Słowacki Theater in Krakow.

(27.09.21) The National Science Centre Poland (NCN) celebrated its 10th anniversary at the beginning of September with the involvement of high-ranking international attendees. At the ceremony in Krakow, DFG President Katja Becker paid tribute in a video message to the successful cooperation between the two partner organisations, which have jointly funded more than 120 bilateral research projects to date as well as developing new forms of cooperation between Germany and Poland.

The DFG offers its cordial congratulations

The festive anniversary event on 9 September 2021 at the renowned Juliusz Słowacki Theatre in Krakow was attended by some 200 invited NCN guests and partners. The opening by NCN Director Zbigniew Błocki, Poland’s State Secretary for Science Wojciech Murdzek and NCN Council President Jacek Kuźnicki was followed by words of greeting from the international alliances Science Europe and Global Research Council (GRC).

As current GRC President, DFG President Katja Becker paid tribute to the successful accomplishments of the partner organisation in her video message, especially with regard to the promotion of knowledge-driven research. She said that this allowed broad knowledge repositories to be established, thereby enhancing the resilience of societies based on available knowledge in different fields – especially in times of crisis.

The following day, 10 September, a panel discussion was held at the International Cultural Centre in Krakow on the themes of research during a pandemic and open science. The former President of the DFG, Peter Strohschneider, and the former President of the Czech Science Foundation (GACR), Alice Valkarova, were among those who engaged in debate on current challenges and future perspectives with experts from renowned universities and European research organisations.

The National Science Centre was founded in 2011 as a nationwide Polish research funding organisation with its headquarters in Krakow – a city that is steeped in tradition, academically, too. From the very beginning, the NCN focused on promoting excellent basic research in Poland with a science-driven approach in all disciplines. The organisation has seen considerable growth in the 10 years of its existence: the NCN now has some 190 employees, a broad funding portfolio that includes international partners, and – like the DFG – it is equally committed to promoting early-career researchers, diversity and the internationalisation of science and research in Poland, Europe and the world.

The DFG and NCN have maintained sound relations from the outset. Back in 2014, the two organisations concluded an agreement on joint project funding in the social sciences and humanities. This joint call was affectionately dubbed the “Beethoven Call” by NCN as a homage to the fact that the DFG’s headquarters are located in the famous composer’s birthplace – the federal city of Bonn. In subsequent years, the call for proposals was continuously expanded, successively extended to include other subject areas and eventually opened up to German-Polish research projects in all subject areas. The interim highlight in terms of joint project funding was when the DFG and NCN joined the European multilateral lead agency programme weave. Weave allows German-Polish and also trilateral integrated research project proposals with German and Polish partners to be submitted for funding at any time to one of the funding organisations participating in weave.

Beyond joint project funding, the DFG and NCN – together with the Foundation for Polish Science (FNP) – have established the Polish-German Science Meeting. This enables German and Polish academic organisations to meet regularly to share their views on current topics and challenges of mutual interest. The next Polish-German Science Meeting is scheduled to take place in Berlin in 2022.