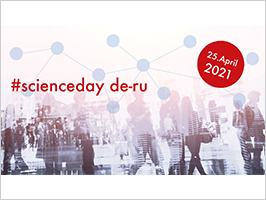 (27.04.21) The DFG Office Moscow presented the DFG’s funding programmes at “#scienceday de-ru” as part of the 18th German Week in St. Petersburg. Involving more than 30 higher education institutions, research institutions and research funding organisations from both Germany and Russia, the week’s events provided insights into the current world of research and higher education to more than 500 participants.

At the end of April, the DFG Office Moscow took part in an event as part of the 18th German Week in St. Petersburg, namely German-Russian Science Day. Maria Ermolaeva presented the DFG’s funding programmes in a so-called “rooftop seating area” – an interactive video room – and was available to provide individual advice to the many interested visitors.

“#scienceday de-ru” was organised with the support of the German Centre for Research and Innovation in Moscow (DWIH) and offered guests the opportunity to find out about research funding opportunities and support for building an academic career in Germany. Other German and Russian organisations were also involved in addition to the DFG, including the Russian Science Foundation (RSF), the Alexander von Humboldt Foundation, the German Academic Exchange Service (DAAD), the Helmholtz Association and the Free University of Berlin.

In the course of the Science Day, participants were also able to visit a virtual exhibition, put questions to representatives of more than 30 German and Russian universities and research organisations, and find out about German-Russian research projects. One example was the presentation of a DFG-funded Collaborative Research Centre (SFB) in Russia – TRR 160 “Coherent Manipulation of Interacting Spin Excitations in Tailored Semiconductors”. This large-scale project is being run jointly by researchers from Dortmund, Bochum, Paderborn and St. Petersburg. SFB spokesperson and Rector of TU Dortmund University, Professor Manfred Bayer, reported on the joint research activities being pursued in the field of spin physics in this context. 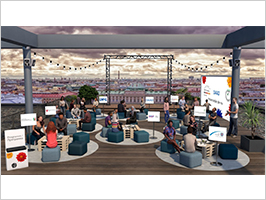 German Week in St. Petersburg is traditionally organised by the Consulate General of the Federal Republic of Germany in St. Petersburg, the German-Russian Chamber of Commerce Abroad and the Goethe-Institut in Russia and is under the patronage of the Governor of St. Petersburg along with one German partner federal state in each case. To mark the 60th anniversary of the partnership between St. Petersburg and the Saxon capital of Dresden, the state of Saxony sponsored German Week this year.

Due to COVID-19 restrictions, the week’s events were held entirely in a hybrid format, though the Consul General of the Federal Republic of Germany in St. Petersburg, Stefano Weinberger, was keen to emphasise that the digitalisation of German Week was making significant progress as a result of this situation. For example, he said, most of the programme items were hybrid events that allowed online participation, thereby reaching a much larger audience than would usually be the case.

The German Week 2021 programme included a wide range of events – from business meetings to exhibitions and film screenings, which this year took place both online and in the form of live performances and meetings. The 18th German Week in St. Petersburg took place from 22-29 April and focused on the Year of Germany in Russia 2020/2021.