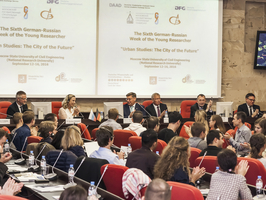 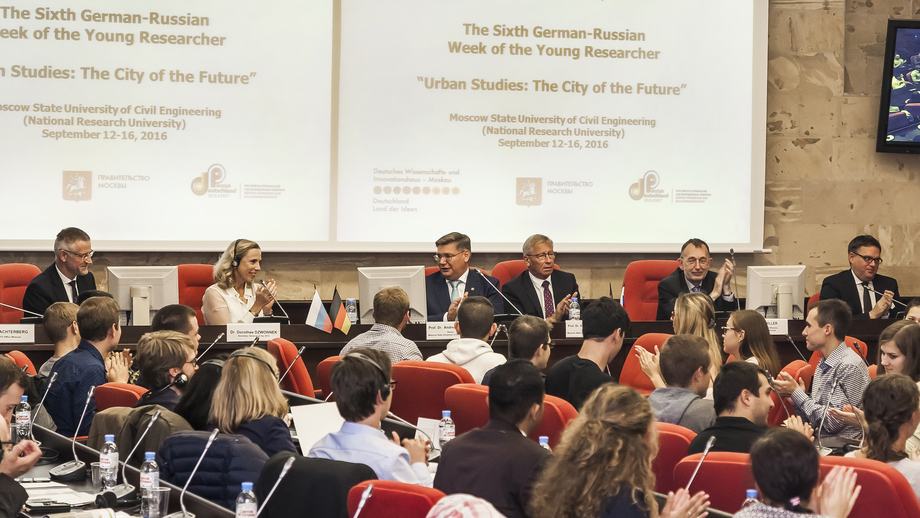 DFG Secretary General Dzwonnek at Week of the Young Researcher 2016 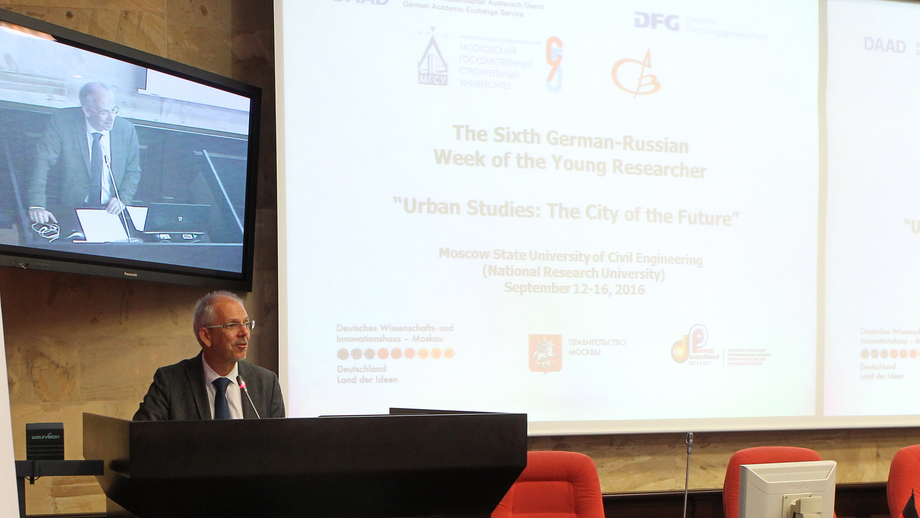 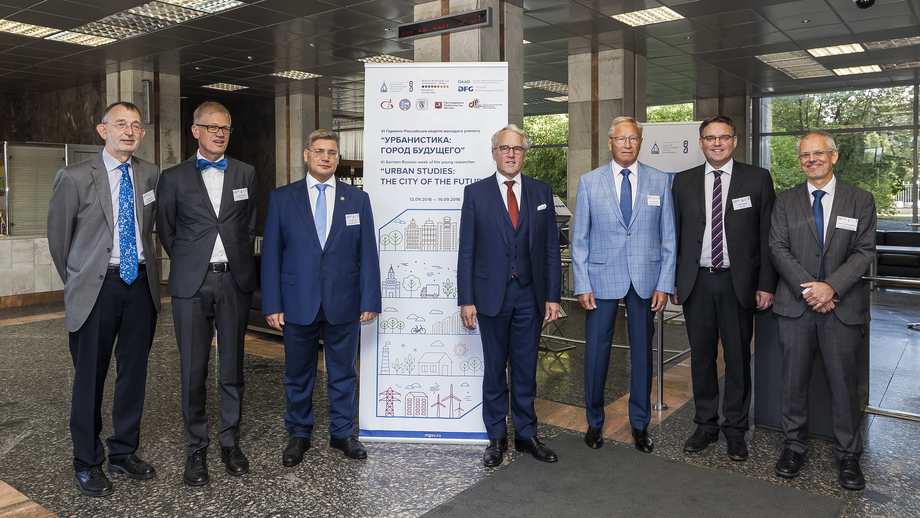 Leaders of the MGSU, with representatives of DWIH Moscow and Ambassador von Fritsch (centre) 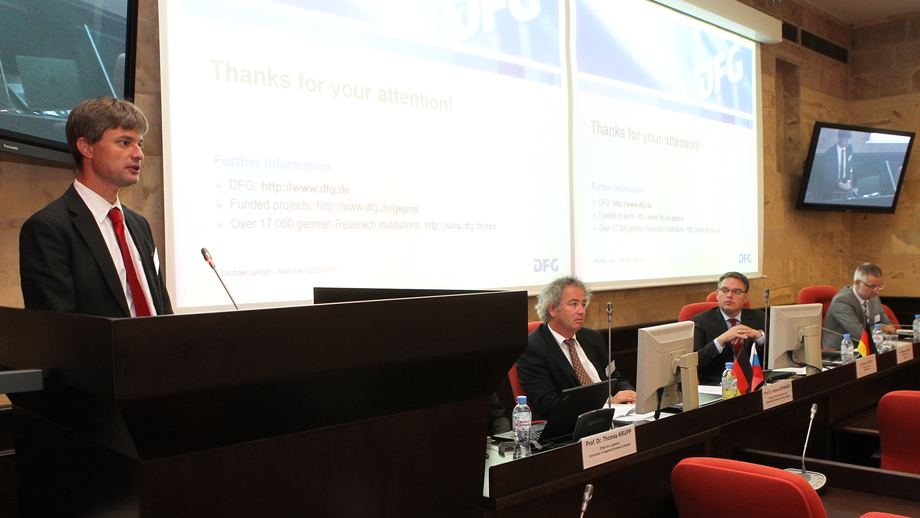 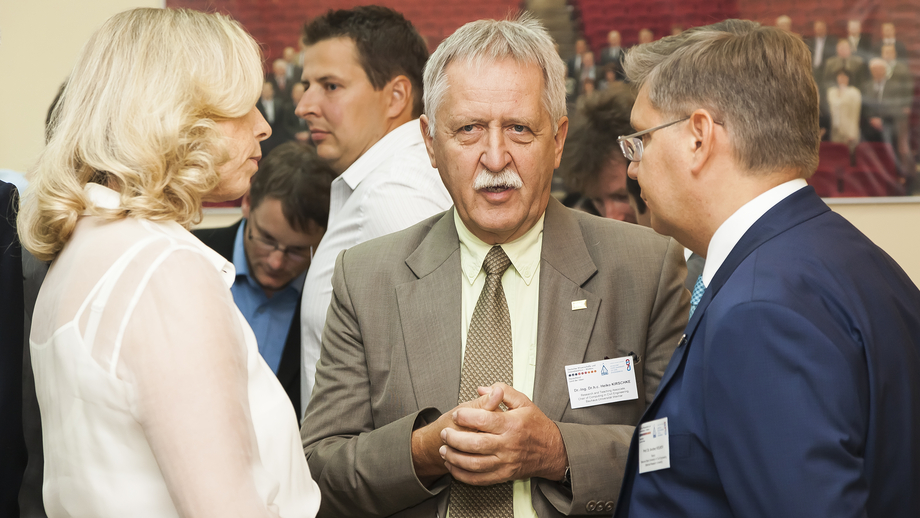 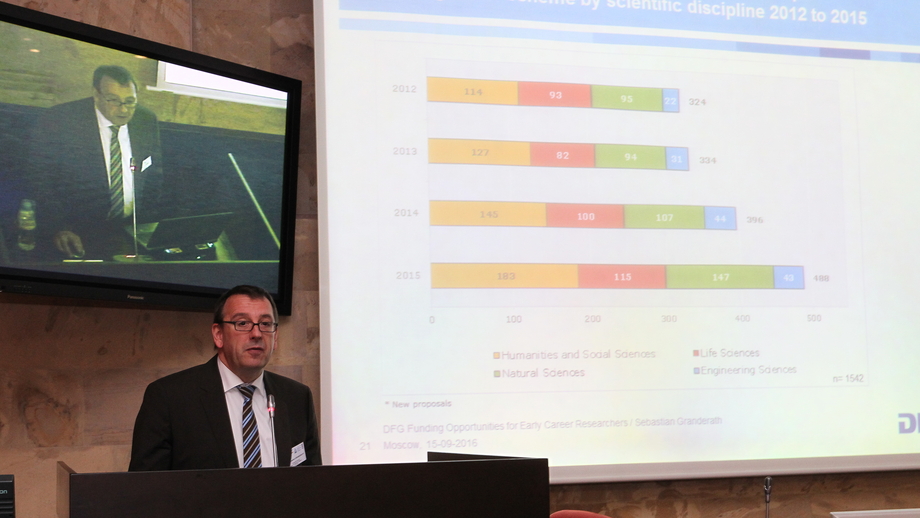 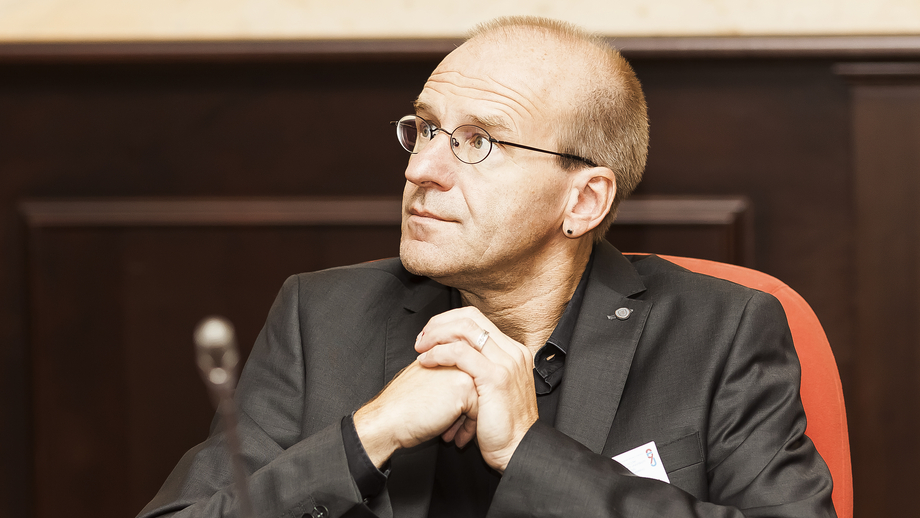 Impressions of the Week of the Young Researcher 2016

DFG Secretary General Dzwonnek at Week of the Young Researcher 2016

Numerous high-ranking representatives of German and Russian universities, research institutions and funding organisations gathered for the opening of the Week of the Young Researcher in the Senate Hall of the National Research University MGSU in the north of Moscow. The participants were greeted by the Rector, Andrey Volkov, and by the President of the MGSU, Valery Telichenko, who, in their addresses, highlighted their university’s long tradition of cooperation with German universities. Words of greeting from the German side were offered by Ambassador Rüdiger Freiherr von Fritsch, Acting Secretary General of the DAAD Ulrich Grothus and DFG Vice President Frank Allgöwer.

In his opening address, DFG Leibniz prizewinner Frank Allgöwer then led into the scientific part of the Week of the Young Researcher, this year dedicated to “Urban Studies”. For the key topic, “City of the Future”, you could not imagine a better city than Moscow, Europe's largest metropolis. Throughout the week, respected researchers from Germany and Russia introduced the various panels with talks and seminars, and moderated the young researchers’ presentations. Reinhard Hinkelmann (Berlin), Markus König (Bochum), Heiko Kirschke (Weimar) and other experienced university lecturers were able to give valuable advice to the early career researchers from Research Training Groups and other DFG funding programmes.

The German participants, in particular, who this year hailed from Aachen, Berlin, Bonn, Bochum, Cologne, Dresden, Munich, Stuttgart and Weimar, also took advantage of the opportunity for in-depth discussion with the DFG delegation. In addition to Vice President Frank Allgöwer, the DFG was represented by Michael Lentze, programme director of the Chemistry and Engineering Sciences division, and Sebastian Granderath, programme director of the Research Careers division, as well as Jörg Schneider, head of the International Affairs division, and the DFG’s Moscow office.

The basic purpose of the Week of the Young Researcher conferences is to encourage wider networking and stronger collaboration between early career researchers. They incorporate interdisciplinary and forward-looking themes and key current issues in bilateral cooperation between Germany and Russia. In addition to the subject talks, the research organisations of DWIH Moscow presented their joint funding programmes with Russia. Once again, the Springer publishing house held a workshop on “Academic Publishing”, offering the young researchers an overview of the whole publication process – from preparation to the publication of results.

This year DFG Secretary General Dorothee Dzwonnek also took part in the week for the first time. Following her talk on the current challenges in German research and higher education policies, the Secretary General took questions from the early career researchers from both countries. In dialogue with the Rector and the President of the Civil Engineering University, light was shed on many aspects of German-Russian cooperation in science and the humanities. With this dialogue, as so often in the past, in particular in politically difficult times, the DFG provided a forum for exchange. Because as Dzwonnek said, science and the humanities can also take on an important mediator role between our societies, enabling communication to take place.

The host university, too, has a particular mediator role – and not only between Germany and Russia. In the past, the MGSU has been regularly involved in the planning and execution of large international projects, such as the Aswan Dam in Egypt and hydroelectric power plants in Asia, as well as the infrastructure for the Winter Olympics 2014 and stadiums for the football World Cup 2018 in Russia. In a few weeks the Moscow State University of Civil Engineering (MGSU) will celebrate its 95th anniversary. The university was founded in 1921, and today it is Russia’s leading civil engineering university. In 2010 MGSU was accorded the status of a National Research University, making it one of a select circle of 'Leading Universities of the Russian Federation'.

The Young Researcher Weeks were set up in 2011 as an initiative of the DAAD and DFG as part of the German-Russian Year of Science, Education and Innovation. Held once a year at changing locations in Russia, they aim to address current issues through international cooperation. The Young Research Weeks are organised together with the country’s leading universities and research centres (Kazan 2011), (Yekaterinburg 2012), (Novosibirsk 2013), (St. Petersburg 2014), (Moscow 2015).