Inauguration of the First German-Russian CRC 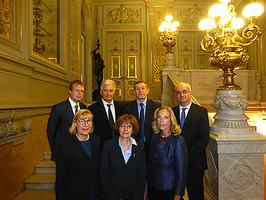 (29.09.15) Première in St. Petersburg: in late September the first German-Russian Collaborative Research Centre (CRC/TRR 160) to be jointly funded by the German Research Foundation (DFG) and the Russian Foundation for Basic Research (RFBR) was formally inaugurated. A delegation from the DFG led by Secretary General Dorothee Dzwonnek travelled to St. Petersburg for the official ceremony. The Technical University of Dortmund, the host university of the new Collaborative Research Centre, was represented by Rector Ursula Gather and CRC spokesperson Manfred Bayer. More than 80 researchers also attended the formal inauguration at the 'House of Scientists'. Welcome addresses were given by the German Consul General, Heike Peitsch, and representatives of the Russian institutions participating in the CRC, which include St. Petersburg State University and the Ioffe Institute.

The first German-Russian Collaborative Research Centre has been funded since the beginning of 2015 for an initial period of four years. It is a so-called Transregio (TRR), split over several research locations. As well as the host university, the Technical University of Dortmund, TRR 160 also includes the University of Bochum and the University of Paderborn in Germany and the Ioffe Institute and St. Petersburg State University (SPSU) in Russia. Together, just under 150 researchers are exploring the topic of "Coherent Manipulation of Interacting Spin Excitations in Customised Semiconductors". On 21 September 2015 the research group was officially inaugurated at the venerable 'House of Scientists' in St. Petersburg.

In politically difficult times, the inauguration of the Collaborative Research Centre sends out an important signal

In fact, it would not have been possible to imagine a better atmosphere for the official launch of the first German-Russian Collaborative Research Centre. The historic House of Scientists in the heart of the 'northern capital', on the Palace Embankment near the Winter Palace and the Hermitage, provided a grand setting for the ceremony. In 1920, Maxim Gorki converted the palace of Grand Duke Vladimir Aleksandrovich with its splendid rooms and halls into Russia's first meeting place for scientists. In the magnificent White Room, the Consul General of the Federal Republic of Germany in St. Petersburg, Heike Peitsch, congratulated the participating researchers and the two funding organisations, the DFG and the RFBR, for setting up this major bilateral project. She noted that St. Petersburg has always played a very special role in science in general and in German-Russian relations in particular. In politically difficult times like these, she said, the inauguration of the CRC sends out an important signal, demonstrating a will for scientific cooperation on both sides and strengthening the dialogue between Germany and Russia.

In a special address, DFG Secretary General Dorothee Dzwonnek also highlighted the long and extremely successful tradition of German-Russian scientific relations. She recalled how the Russian Academy of Sciences and the State University were founded in St. Petersburg in 1724 with the energetic support of leading German scholars, especially Gottfried Wilhelm Leibniz. Since that time there have often been political interruptions to bilateral cooperation, especially very recently, but the DFG has set itself the task of facilitating collaboration between the two research nations, even under difficult circumstances. This, said Dzwonnek, is why all DFG funding programmes remain open for the participation of Russian researchers. As excellent examples of this, she named this first German-Russian Collaborative Research Centre (TRR 160) and the first German-Russian International Research Training Group in the humanities (IRTG 1956), inaugurated in March of this year in Moscow. "These two major long-term research alliances form a strong foundation for future cooperation between our two countries, because they support the development of young German and Russian researchers through integrated early career support," said Dzwonnek.

In TRR 160, the Technical University of Dortmund and St. Petersburg State University see a unique opportunity to expand their existing partnership. The Vice-Rector of SPSU, Sergey Tunik, conveyed the congratulations of the university leadership and the university as a whole – one of the oldest and most important scientific institutions in Russia. In her welcome address, Ursula Gather, Rector of the Technical University of Dortmund, also referred to the many years of collaboration with other leading research institutes in St. Petersburg, which contributed to the establishment of the CRC. Yuri Kusrayev, Deputy Director of the Ioffe Institute and co-spokesperson of the new CRC, then highlighted two aspects that acquire even more importance in the context of the current reform of the Academy of Sciences and the impending closure of many Russian research institutes: the collaboration within the CRC will not only enhance international visibility in the short term but also generate long-term funding prospects for joint research projects.

Following these words of welcome, CRC spokesperson Manfred Bayer (Technical University of Dortmund) explained the objectives and work program of the long-term project. Over the next 12 years, through the targeted control of spin excitations, the team hopes to make decisive progress in developing new components for information technology in the semiconductor materials that are used for this purpose. Bayer explained that the charge carriers in these materials rotate like a spinning top, a property known as 'spin'. But how can this be put to use in electronic components? TRR 160 intends to answer this question by manipulating the electrical, optical and above all magnetic properties of electrons in semiconductors. To do this, the participating researchers will use state-of-the-art spectroscopy techniques and theoretical methods and develop new material and component concepts. Ultimately the group hopes to lay the foundations for spin electronics, spin optics and spin-based quantum information processing. 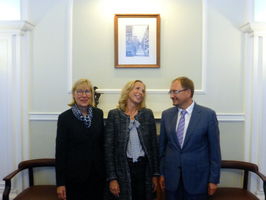 The inauguration ceremony was rounded off by a short reception in the historic Oak Room, to which everyone was invited by Alexey Kavokin (SPSU), Russian co-spokesperson of the CRC and moderator of the event. The more than 80 guests, who included approximately 35 participants from the Collaborative Research Centre in Germany as well as representatives of other German and Russian science organisations, research institutions and universities in St. Petersburg, took advantage of the opportunity to network and catch up with old acquaintances.

The first German-Russian CRC: a milestone in scientific cooperation

The general expansion of relations with St. Petersburg State University also continued on the following day with the visit of a German delegation to the university. Rector Nikolay Kropachev welcomed DFG Secretary General Dorothee Dzwonnek and the Rector of the Technical University of Dortmund, Ursula Gather. Also present at the meeting in the rector's office were DFG programme director Amelie Winkler from the Research Centres division, DFG programme director Michael Mössle from the Physics, Mathematics and Geosciences division, who holds technical responsibility, and the Director of the DFG's Russia office, Jörn Achterberg. The first German-Russian CRC was hailed on both sides as a milestone in scientific cooperation. The German and Russian negotiation partners also reached concrete agreement on further aspects of collaboration, relating to both the partnership with the Technical University of Dortmund and institutional cooperation with the DFG.