(24.06.15) At the beginning of June the Deutsche Forschungsgemeinschaft (DFG, German Research Foundation) and the Russian Foundation for the Humanities (RFH) held their first joint Leibniz Lecture in Russia. Historian Hartmut Leppin from the University of Frankfurt, the winner of this year's Leibniz Prize, addressed a captivated audience of around 120 on the theme of "Humility and Power" at an evening lecture in the antiquities collection of the Russian State University for the Humanities (RGGU). 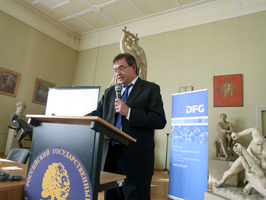 The lecture was attended by renowned professors, doctoral researchers and young students from leading Moscow universities and research institutions of the Russian Academy of Sciences. The guests were welcomed by Efim Pivovar, the rector of the host university, who gave special permission for the university's impressive antiquities collection to be used as the venue for the event.

The head of the department of culture at the German Embassy in Moscow, Werner-Dieter Klucke, said a few words of welcome on behalf of the embassy, noting the special role played by scholarship and lectures such as the Leibniz Lecture as a forum for dialogue between Germany and Russia in politically tense times.

In a brief speech, Jörn Achterberg (head of the DFG's Moscow office) and Vasily Grebenyuk (head of the humanities department at the RFH) presented the idea of holding a joint Leibniz Lecture at least once a year in Russia. The DFG organises Leibniz Lectures, given by recipients of Germany's most important research prize, in countries all over the world where Germany has a diplomatic mission. The lectures present the latest topics of top-level research in Germany and opportunities for bilateral cooperation. The idea of the lecture series is for Leibniz prizewinners to act as ambassadors for German research. A study of the publication output of prize recipients by Lucy Amez (Brussels) illustrates the high potential for international cooperation.

Hartmut Leppin from Goethe-Universität Frankfurt am Main opened the new series of DFG/RFH Leibniz Lectures with his lecture on "Humility and Power: The Christian Emperors of Late Antiquity". Leppin is among the world's leading scholars of antiquity in his particular field, said Torsten Fischer, responsible DFG programme director in the DFG's Humanities and Social Sciences group, in his introduction of the speaker and 2015 Leibniz Prize winner. The audience were able to see this for themselves during the lecture, which prompted numerous questions and stimulated a lively discussion.

Hartmut Leppin was also much in demand on the days before and after the lecture, for example discussing opportunities for collaboration as the spokesperson for the new Collaborative Research Centre "Discourses of Weakness and Resource Regimes" (CRC 1095). He met with the directors of leading Academy institutes, such as Yuri Petrov (IRI RAN), Nikolai Makarov (IA RAN) and Aleksandr Chubaryan (IVI RAN), as well as Pavel Shkarenkov and Sergei Karpov, the deans of the faculties of history at RGGU and MSU respectively. Because of the enormous interest he generated, Prof. Leppin received various invitations to deliver further lectures, for example at Lomonosov Moscow State University (MSU).

However, he was travelling to Moscow not only as a Leibniz Prize winner, but also as an elected member of Review Board 101 "Ancient Cultures", to which he has belonged since 2008. In this role he was able to promote dialogue between panels of experts[GI1] from the DFG and RFH. He met with the chair of RFH, Vladimir Fridlyanov, and together they discussed new possibilities for institutional cooperation between the two partner organisations. Last year the DFG and RFH reintroduced joint project funding in the humanities and social sciences.