"Global History" – Brochure for the German-Russian Week of the Young Researcher in St. Petersburg 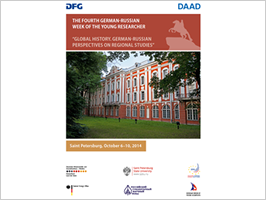 (11.03.15) From 6 to 10 October 2014, the German Academic Exchange Service (DAAD) and the Deutsche Forschungsgemeinschaft (DFG, German Research Foundation) organised the fourth "German-Russian Week of the Young Researcher" under the umbrella of the German House for Research and Innovation (DWIH Moscow). Over 50 doctoral and postdoctoral researchers and professors from both countries, including DFG Vice President Peter Funke and Martin Schulze Wessel, the Chairman of the Association of German Historians (Deutschen Historikerverband – VHD), came together at St. Petersburg State University to spend a week discussing their various approaches to research on the topic of "Global History". The Brochure can be read online and downloaded from the DFG web site.

The first "Young Researcher Week" took place in 2011 at the Federal University of Kazan on the topic of "Man and Energy", with a second in 2012 at the Federal University of Yekaterinburg which took as its theme the subject of "Health and Society". September 2013 saw the third event of this kind in Novosibirsk where the topic was "Aviation and Space". The Young Researcher Weeks were set up as an initiative of the DAAD and DFG as part of the German-Russian Year of Science, Education and Innovation. Held once each year at changing locations in Russia, they aim to address current issues through international cooperation.