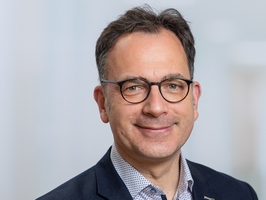 (11/29/21) Together with the German Center for Research and Innovation (DWIH) New York and the University of Freiburg liaison office, the DFG invited Freiburg-based neuroscientist and Leibniz Prize award winner Dr. Marco Prinz to give a lecture at 1014 Fifth Avenue on the evening of 17 November. After brief welcomes by the German Consulate General and the DWIH, the head of the DFG Office North America, Dr. Georg Bechtold, gave a short introduction highlighting the importance of the Leibniz Prize in terms of the international visibility of research in Germany. Dr. Matthias Haury of the Max Planck Florida Institute set the stage for Professor Prinz’s talk by outlining the neuroscientific context and the speaker’s biography. In a talk both informative and entertaining, Professor Prinz bridged the gap from ancient Egypt – where the brain was not assigned any special status and people were merely astonished that it liquefied after death – to the beginnings of scientific neuropathology in the 19th century, touching on such renowned scientists as Alois Alzheimer, Rudolf Virchow, and Siegmund Freud (sic!). 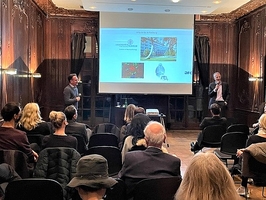 Things became even more fascinating when it came to research into the central nervous system, a prime research focus for Prinz, and the first visualization of microglial cells in the brain by Pio del Rio Hortega in 1919. A hundred years after this discovery, said Prinz, the various functions of this cell type were still far from being well understood: he explained that it actually belonged to the human immune system and was considered the brain’s equivalent to the macrophage.

Thanks to the ever-improving resolution of imaging techniques (multiphoton microscopy) and, more recently, the availability of DNA sequencing of individual cells (single-cell RNA-sequencing, – scRNA-seq), it was now possible to map the brain in much more detail, said Prinz. These tools enabled the immunological aspects of numerous brain diseases such as Alzheimer’s and multiple sclerosis to be explained based on individual cells. Otherwise very helpful as “gardeners and rubbish collectors” in the brain, microglial cells figured as the “bad guys” in the vast majority of such disorders, said Prinz, and it was still unclear whether the observed changes in the microglial cells were the cause or the effect of the pathological brain findings. This is why this cell type was currently one of the most fascinating subjects of research into the human brain, he noted. Thanks to a global network of researchers and the relevant investments by research funding organizations such as the DFG, breakthroughs in understanding the role of these cells in pathological changes in the brain could be expected to be forthcoming within a short time – certainly as compared to the period that had passed since microglial cells were first discovered. Freiburg was a key location in all of this, said Prinz, adding that the city offered excellent quality of living for many other reasons, too. 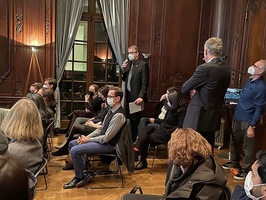 Lively discussion with the audience

In view of the prospects of gaining a better understanding of disorders of the central nervous system and therefore improving prevention and healing, the discussion round moderated by Dr. Haury particularly aroused the interest of the non-experts among the audience of least 50. There were a few experts in the audience; the debate subsequently developed more into something of a neuroscientific colloquium, although Professor Prinz and Dr. Haury were adept at ensuring any technical answers remained comprehensible to all present. Numerous discussions continued afterwards at a small reception. Just as with the lecture beforehand, the lively atmosphere was a clear sign of the event’s success.