“Networking, dialogue and an open-minded attitude”

(08/25/21) The GAIN annual conference has become established as a classic networking event for academic careers in Germany. “And classics are classics because what they promote remains topical: networking, dialogue, and an open-minded attitude are fundamental to any kind of high quality research," said DFG President Dr. Katja Becker, commenting on the core idea of the GAIN initiative. It is a joint annual event organized by the German Academic Exchange Service (DAAD), the Alexander von Humboldt Foundation (AvH) and the DFG. Becker promoted Germany as a highly promising research hub that offered excellence and diversity as well as an exceptionally high degree of academic freedom. 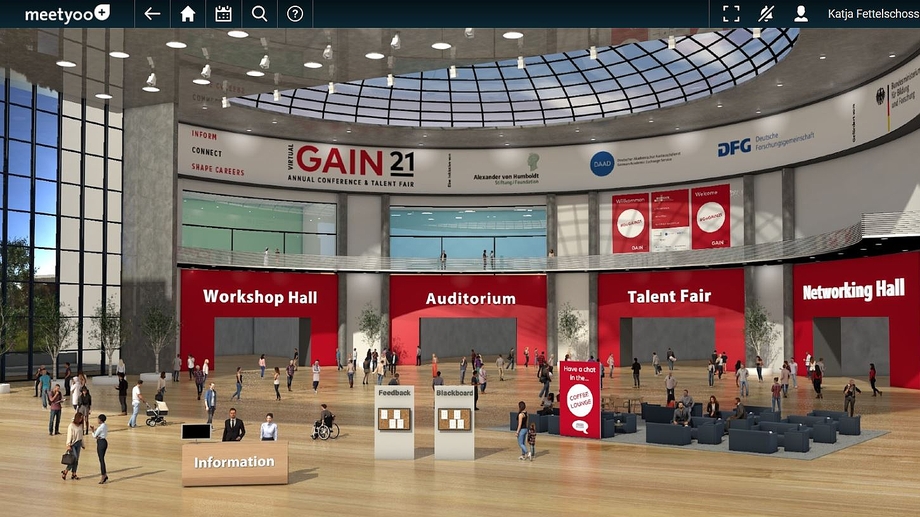 Entrance to the virtual GAIN21 conference 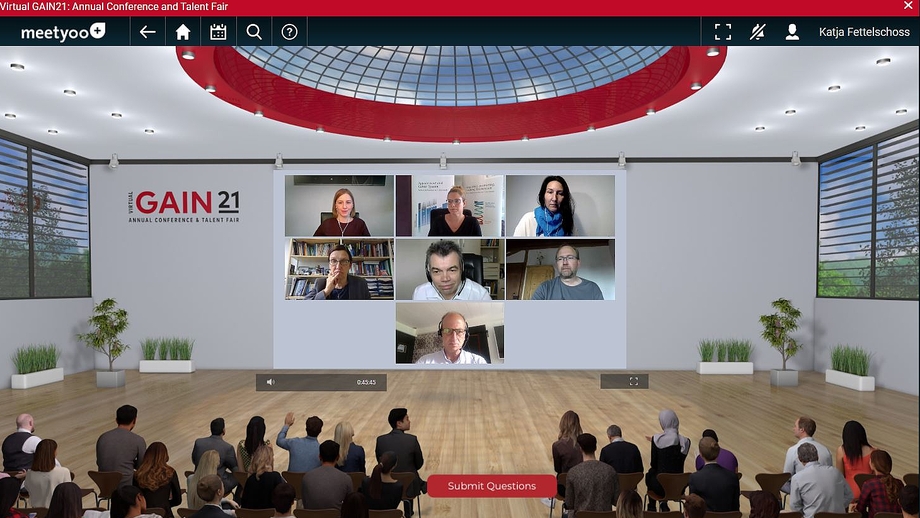 Numerous workshops and webcasts were held in parallel, in four program blocks spread over the three days. The webcasts, organized as plenary events, dealt with topics such as tenure-track professorships, international research marketing and term negotiations. 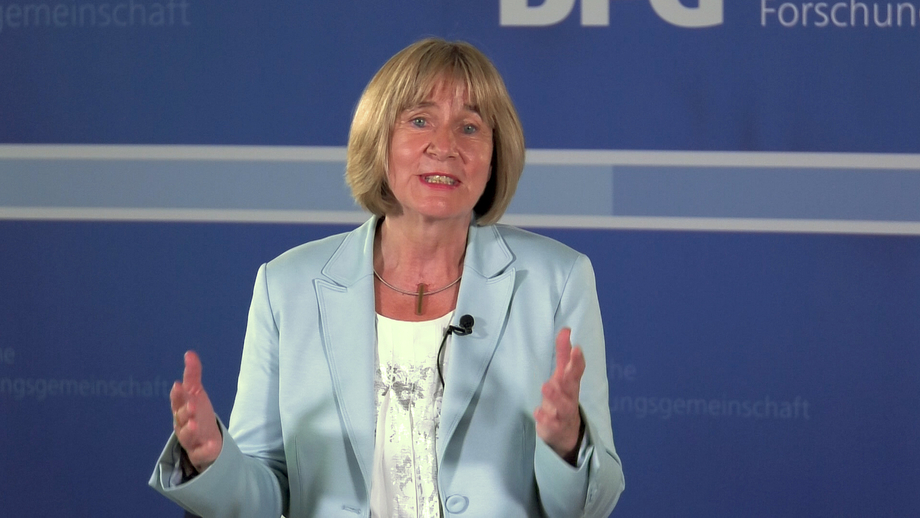 DFG Secretary General Dr. Heide Ahrens described the goal of the reception for fellowship recipients as "a cheerful and entertaining form of exchange with the DFG, but also with each other." 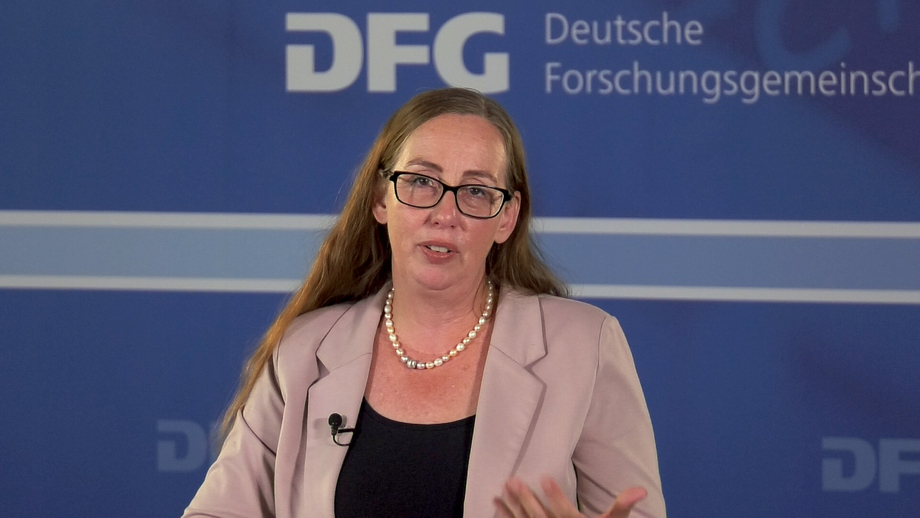 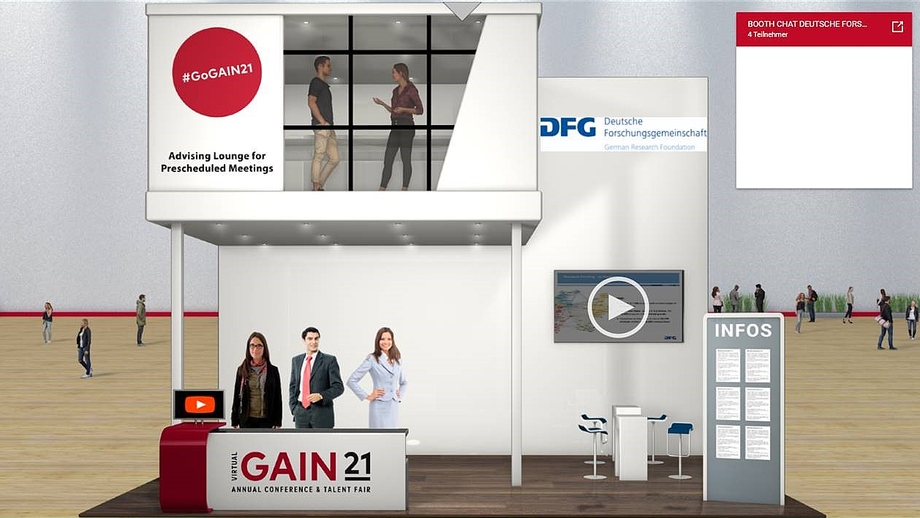 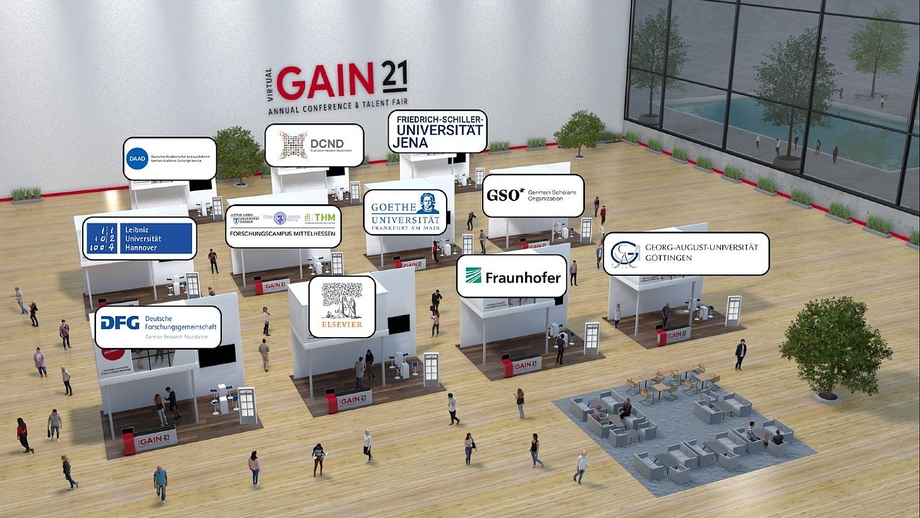 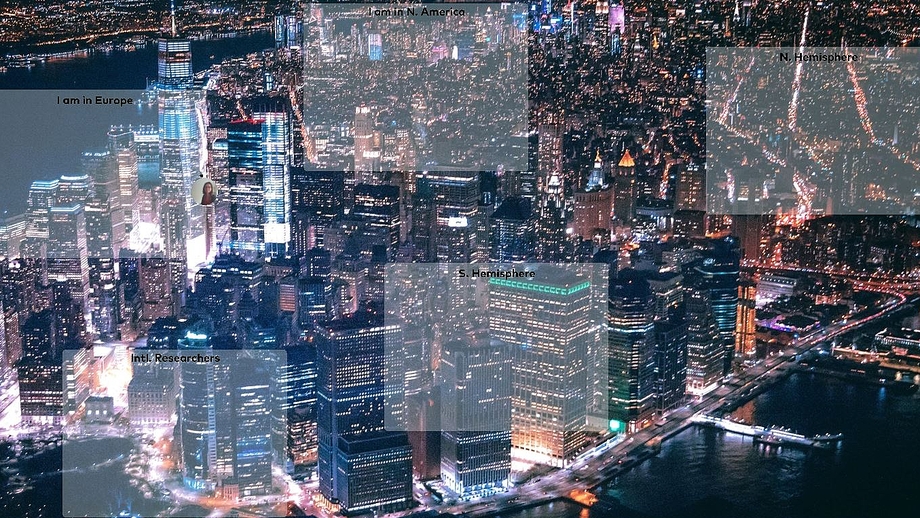 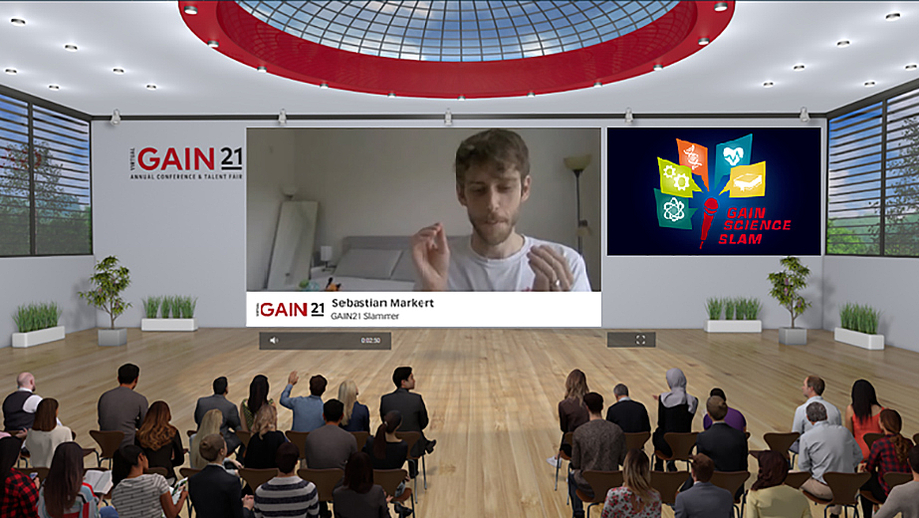 Impressions of the GAIN Annual Meeting 2021

Entrance to the virtual GAIN21 conference

Academic freedom and sound funding opportunities, as arguments for pursuing an academic career in Germany, were key ideas that arose in the debate with members of all parliamentary groups in the German Bundestag, as well. Despite having been invited, the Alternative für Germany (AfD) was the only party not represented at the round table – just one opportunity among many to obtain information and advice that were offered to the approximately 1,000 participants at GAIN21. Despite differing assessments on various individual issues, the members of parliament agreed that Germany was very well positioned internationally, with 3% of its GDP going into research and development every year, as along with the various pacts for research funding. In view of the increasing number of global problems such as climate change, democracy and migration issues, and of course the coronavirus pandemic, growing importance is being attached to scholarship and the need for good researchers, said the chairman of the Committee on Education, Research and Technology Assessment, Dr. Ernst Dieter Rossmann (SPD). 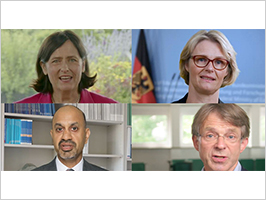 Kai Gehring (Bündnis 90/Die Grünen) was among those who saw Germany as being at an ongoing competitive disadvantage, especially as compared to the USA, and thus a need to catch up in terms of Germany’s “welcoming culture.” Institutions such as the DAAD and the AvH should be included in the pacts, administrative hurdles to visas and the recognition of international degrees and qualifications had to be dismantled, and all aspects of diversity ought to be taken into account across the breadth of the research system. In addition – and here too there was cross-party agreement – the focus should continue to be on the situation of academics at an early stage of their career with a view to improving their overall status.

Finally, the members of the Bundestag were curious to find out how the situation in the USA had developed “after Trump”. Benedikt Brisch of the DAAD said there was considerable ongoing relief at the fact that discussion was now objective and there was much less hostility towards academia. The situation at universities is still tense due to the pandemic, he said, since their dependence on private funding made them vulnerable to change. He went on to explain that large universities had more leeway than smaller ones, with extremely high tuition fees of $50,000 to $70,000 at elite universities resulting in heated social disputes.

Improvisation in all situations

Like the political debates, the DFG’s reception for its fellows is an integral part of GAIN. Dr. Heide Ahrens, Secretary General of the DFG, welcomed the approximately 100 participants, noting that despite all the practical experience now gained in terms of virtual cooperation, a certain amount of improvisation was always needed when it came to transferring things to the digital sphere. “We need improvisation in research just as we do in social interaction, getting to know each other and networking,” said Ahrens. In order to better understand how to raise one’s own improvisation potential, she said, it made sense to learn from the masters of improvisation – namely the great jazz musicians.

In his keynote speech, Dr. Joachim “Jo” Junghanss, Associate Director and Head of Jazz and Pop at the Conservatory in Amsterdam, explored this idea in greater detail. Taking the example of “Straight, No Chaser,” a composition by American jazz musician Thelonius Monk, Junghanss explained the delicate balance between improvisation and structure – in both improvised music and career planning. Junghanss concluded his talk with another piece by Monk and an encouraging message: the track “Well, You Needn't” was sometimes understood among jazz musicians to mean “Well, you needn't worry about any changes” (i.e. chord changes), said Junghanss. The next generation of academics could equally rely on their already highly distinctive talents, he added, which is why the message here was: “Well, you needn't worry about your career.”

The evening was hosted by Dr. Ulrike Eickhoff, head of the DFG’s Programme and Infrastructure Funding Division. The event was very positively received by the fellows and (even though it was held virtually) with its small-scale discussion groups fulfilled its purpose very well, showing how networking is done.

In addition, GAIN21 offered early career researchers a wide range of information, advice, and networking opportunities, which participants made active use of. At the “Talent Fair,” more than 50 institutions from research and business were represented, offering information and vacancies. The three funding organisations that put the event together likewise provided information about their funding programmes. There were also a number of information and discussion sessions on topics relating to careers in and outside academia, both as workshops and plenaries. Meanwhile a coffee lounge and a networking platform facilitated a more informal exchange. . Last but not least, GAIN once again featured entertaining science communication -- six researchers presented current research results in a digital science slam. The $3,000 prize money was awarded to Sebastian Markert of Johns Hopkins University in Baltimore for his contribution, “What happens when we close our eyes?,”, in which he talked about what happens on the retina when we close our eyes.

Like last year, the virtual format of the GAIN annual conference with its many participants revealed a high level of interest in the network meeting on academic careers in Germany, also among postdocs outside North America. In order to continue to remain up to date, this classic event will again adopt something of a new look in 2022: GAIN22 will take place in Germany for the first time, in the federal city of Bonn. The target groups in 2022 will be doctoral and postdoctoral researchers from all over Europe.