„Been in America“: Interviews with German researchers in the USA and Canada

(02/16/21) In autumn 2019, Dr. Iris Elser started her second postdoc – this time an international one – in Douglas Stephan’s group at the University of Toronto as a fellow of the German Research Foundation (DFG), where she is researching frustrated Lewis pairs. She spoke to the DFG Office North America about various topics, including her areas of interest, her professional ambitions, life in Canada in the late stages of the Trump era, and cooking.

Through its research fellowship program and the Walter Benjamin Program, the DFG supports junior scientists in their academic careers by funding an independent research project abroad and, since 2019, in Germany too. A large proportion of these fellowships are awarded in the USA and (to a lesser extent) in Canada, reflecting the belief -- still prevalent across many areas of science and academia -- that for a career in research you have to have "been in America.” Through this series of interviews, we would like to give you an insight into the wide range of DFG funding recipients and their research endeavors and personalities. In this edition you will meet the person behind funding number EL 1045.

Douglas Stephan's research group at the University of Toronto

DFG: Ms. Elser, many thanks for taking the time to talk to us. You’re currently doing research on frustrated Lewis pairs, yet you’re neither a psychologist nor a sociologist, but a chemist. That certainly raises some questions.

Iris Elser (IE): Thank you very much for this opportunity to talk to you, and also a big thank you to the DFG for the postdoctoral fellowship, which is currently allowing me to pursue research in chemistry as part of Doug Stephan’s group. To start from the basics: like people, elements have a preferred state of being, and they are more or less inclined to enter into certain bonds with others. If this doesn’t happen – to a non-expert this is surprisingly often the case, and it’s something I provoke in the course of my work – it can result in frustration. What is fascinating to me is what happens as a result of this frustration. When chemists talk about Lewis pairs, they are not referring to Mr. and Mrs. Lewis, but to compounds according to the acid-base theory developed by Gilbert Newton Lewis, an American chemist who lived in the first half of the twentieth century. Does that answer some of your questions?

DFG: Yes, thank you very much. You passed your secondary school leaving exam at Hegel-Gymnasium in Stuttgart with an average grade of 1.5, so you could have chosen virtually any subject. Why chemistry?

IE: An excellent biology teacher is mainly to blame. I was initially very interested in biochemistry and I could have opted for medicine. But by the time I got my place at university, I’d already been studying chemistry for three months and the rest is history. Looking back, I don’t see any genetic predisposition either. My mother is a teacher, my father’s an architect and my younger sister has become a cyberneticist. Thankfully, our parents have always given us their full support and trust.

DFG: You didn’t immediately go far from home to study, but completed your bachelor’s and master’s degrees at the Institute of Polymer Chemistry (IPOC) at the University of Stuttgart under the guidance of Professor Buchmeiser, achieving excellent results and eventually going on to obtain a distinction in your doctorate – likewise under Professor Buchmeiser's supervision. Were things getting a bit monotonous for you by that time?

IE: No, not all: I’m very attached to where I come from and – probably much more important – IPOC is one of the truly leading institutions of its kind in Germany with an above-average proportion of women as well as very strong international links and outreach. I was able to enjoy a very broad education under Professor Buchmeiser, and right from the start of my first postdoc I was part of the Collaborative Research Centre “Molecular Heterogeneous Catalysis in Defined Directing Geometries” (SFB 1333), which was new at the time. What more could one want?

DFG: But at some point you did want more. What happened?

IE: A colleague of mine who had moved to Münster came into contact with Doug Stephan and suggested I take a look at his website. There one can see a broad range of questions currently being worked on in inorganic chemistry but also photos of the lab equipment: 18 workstations at nine glove boxes (you know, those facilities where you can work in controlled atmospheres) plus two large-area labs with exhaust ducts. That’s quite something – definitely a place where one can get things done! Then there’s the measuring and analysis equipment, which is naturally state-of-the-art, and – as I’ve since come to find out and appreciate for myself – another research group leader whose enthusiasm is hugely infectious.

DFG: But you don’t actually cook, do you? What is it exactly that you do?

IE: Well, not really – but there are definitely some parallels. For example, a lot of my “ingredients” are kept in the fridge and, as with cooking, I have to be very precise with the weights to get the desired result. In my daily lab routine, after careful planning, I mainly sit at the glove box, weigh in my reagents, mix them together either chilled or at room temperature in a suitable solvent, depending on the reaction, and then let them mix in a small screw-top jar or flask. While that’s happening I take samples, which I remove from the glove box in special airtight sample tubes, and then I analyse these, mainly using NMR spectroscopy (similar to an MRI at the doctor’s). If I’m satisfied with the result, I repeat the reaction on a larger scale and try to isolate the desired product result– by means of crystallization or washing with different solvents – and then characterize it. If I’m not satisfied, I systematically alter the temperature, solvent and mixing ratio and start all over again. The biggest difference from cooking is probably the fact that I don’t want water or air near my reactions under any circumstances – and I strictly avoid eating my product, too!

DFG: It all sounds very much like cooking. Do you cook at home as well? If so, what is your signature dish?

IE: Chemistry has a lot in common with cooking in many respects – not just because it also uses “recipes” that are systematically listed in tables. That’s when it goes by the book. But just like in your kitchen at home, you’re occasionally confronted with situations in the lab where you have to improvise – rather like that instinct it takes to get the pinch of salt just right so the soup tastes perfect. I’m from Swabia so I’m proud of our special filled pasta – what we call Maultaschen – and I was keen to show mine off to my flatmates in Toronto over Christmas. Unfortunately, I wasn’t able to bring my pasta machine over from Stuttgart to Toronto for the postdoc – and lasagne dough is not really suitable for Maultaschen. It’s what you call “20/20 hindsight”: after Christmas I was that bit wiser. But my two flatmates still greatly enjoyed their meal!

DFG: Are your flatmates chemists, too?

IE: No, one is a biomedical scientist from Spain and the other is a Californian healthcare student. It’s certainly a very diverse mixture – not just in the lab and in my flat but in Toronto as a whole. 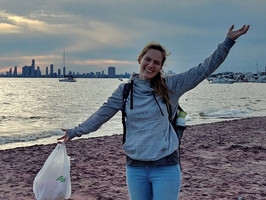 DFG: Perhaps you could elaborate a little for any of our readers who might be unfamiliar with the area.

IE: Gladly. Toronto is situated on one of the Great Lakes – and the adjective ”great” is definitely to be taken literally: they are huge bodies of water that also have a powerful impact on the local climate. In winter right now it can get very, very cold; after all, we don't have the Alps here to protect us from the polar air. That’s why the entire city has a network of passageways and shopping arcades tunnelled underneath it, so you can always get from A to B underground if you want to. In summer it’s sometimes so humid it can even affect our work in the lab. But I’m very happy here in the city. One of the first things I bought was a bicycle. Distances are much longer in this country. Back home, it's just a 15-minute bike ride to the lake from where I live. There’s actually a half marathon there this summer which I’d like to take part in. For a city the size of Toronto, everything is very relaxed and the Canadians are very friendly, too – even more so than their neighbors to the south, or so I keep hearing.

DFG: Yes, in the past four years especially, i.e. while Donald Trump was US president, Canada was seen as the much more likeable America. Did you notice any of that in Canada?

IE: When I arrived here, the Toronto Raptors had just become the first Canadian team ever to win the North American professional basketball championship a few months earlier. Not that I was particularly interested, but you could sense that people felt a certain pride vis-à-vis their neighbors to the south. The Trump administration’s immigration and visa policies have probably not done the USA much good in terms of its international reputation as a place to study and research, but it’s not as if people here made a big thing about it. As I said, Canadians are very friendly and tend to keep quiet if there’s nothing positive to report.

DFG: Do you expect to achieve the goals you’ve set yourself for your research stay in Toronto, and where will you go from here?

IE: I think I’m doing very well, in spite of the corona-related setbacks. Incidentally, the DFG provided very fast and unbureaucratic help here – many thanks for that, too. In autumn it looks very much as if I‘ll be able to complete my project in Toronto, after which I’ll apply for a position as a research group leader in Germany, quite possibly under the DFG’s Emmy Noether Program. I still enjoy working in the lab – on the front line, as it were – but I’ve also come to feel the need to address larger-scale questions and to lead a group in order to do this.

DFG: So you might go back to Stuttgart then? 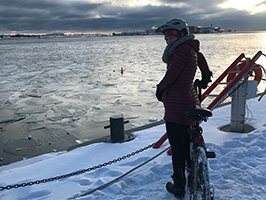 IE: Stuttgart is definitely a very attractive option, but there’s a lot of very good quality work being done in Germany now and I can think of at least four or five other very promising places where I could continue my work. An above-average proportion of women and a high degree of internationalism are now a given at this level – whether in Münster, Duisburg-Essen, Göttingen, Jena; or Ulm.

DFG: SFB 1333 is one of a group of four outstanding networks in the field of catalysis research. How far away from catalysis are you with the Lewis pairs?

DFG: One final question: at what point do you think the models of chemical reactions and the ability to map them in silico, i.e. on a computer, will be so good that “cooking” in the lab will be largely superfluous?

IE: It’ll probably be a while before that happens. As the size of molecules increases, so does their complexity – not in linear fashion, unfortunately, but exponentially. Things can quickly get shaky and there are lots of variables. So we’ll certainly be “cooking” for years to come, if not decades.

DFG: Thank you very much for this assessment and for taking the time to talk to us. We’ll keep our fingers crossed that your plans for the future materialize for the best – and that you’ll be able to take your pasta machine with you for those Maultaschen wherever you end up going next.