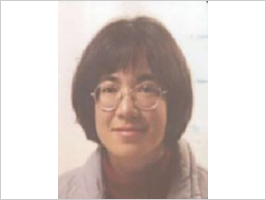 The focus of Guinevere Kauffmann's research has been to establish a connection be-tween theoretical models of structure formation in the universe and the properties of the luminous galaxies that we observe, both at the present day and at high redshift.

It is currently believed that most of the mass in the universe is in the form of an invisi-ble "dark matter" component and that galaxies, groups, clusters and superclusters formed as the result of the gravitational amplification of small density perturbations that existed in the dark matter at some very early epoch. The detection of fluctuations in the microvawe background radiation have enabled theorists to place strong con-straints on the form and the amplitude of theses fluctuations. One important conclusion is that structure formation in the universe is a hierarchical process: large structures form by the successive merging of smaller subunits. Galaxies merge together to form groups, which in turn merge to form clusters and superclusters.

Dr. Kauffmann's PhD thesis work in Cambridge focused on the development of a theoretical framework to model the formation and evolution of galaxies within a merg-ing hierarchy of dark matter halos. Together with Simon White, she developed a new method of tracing the entire merging history of a present-day dark matter halo. These merging "trees" were akin to family trees, in that they allowed all the progenitors of a present-day object, such as a galaxy cluster, to be traced back to arbitrarily early times. Simple prescriptions were then adopted for how gas was able to cool and form stars within these halos. When these were coupled with models of stellar evolution codes, it was possible to make detailed predictions about the observed properties of galaxies such as their luminosities and their colours. These techniques have now become a 'standard' in the field, with many groups throughout the world (e.g. in the UK, the US, Japan, France and Italy) engaged in developing very similar models.

Dr. Kauffmann then went on to apply these models to a wide variety of astrophysical problems. One topic she investigated in considerable detail was the formation of ellip-tical galaxies. For many years, there have been two competing theories for how this special class of galaxy is formed. One theory holds that ellipticals formed in a single catastrophic collapse at very early epochs. According to a competing theory, ellipticals formed more gradually, through merging of several spiral galaxies like our own Milky Way. In hierarchical structure formation theories, mergers between different galaxies very common in the early universe. Dr. Kauffmann's modeling has yielded predictions for the rate at which ellipticals are formed as a function of cosmic time and these are now being compared with data from large telescopes such as the Keck Telescope an Mauna Kea in Hawaii and the Very Large Telescope (VLT) in Paranal, Chile.

When two galaxies merge, gas is often driven far into the merger remnant. If the gas is able to reach the very center, it may be accreted by the supermassive black hole that is now believed to reside at the center of every galaxy in the universe. The gas accreting onto the black hole is able to radiate a few percent of its rest mass energy and as a re-sult, the nucleus of the galaxy becomes extremely luminous for a short period and the system is then referred to as a "quasar". In a series of papers, Kauffmann has investi-gated the formation and evolution of black holes and quasars within galaxies. Her work is currently being tested using observations by the Hubble Space Telescope, which are able to resolve the properties of the galaxies that host luminous quasars at high redshifts.

Another major research topic of Dr. Kauffmann has been the large-scale clustering properties of galaxies. By making use of very large numerical simulations of the evolution of structure in the universe, it is possible to study how the spatial distributions of different types of galaxies evolve with time and how they are related to the underlying distribution of dark matter. Dr. Kauffmann has written a series of papers on galaxy clustering, comparing the predictions of the models to data from a number of large galaxy surveys.

Most recently, Dr. Kauffmann has turned her attention to analyzing the properties of galaxies in the new Sloan Digital Sky Survey (SDSS). The SDSS is the most ambi-tious astronomical survey project ever undertaken. It will map in detail one-quarter of the entire sky, determining the positions and brightnesses of over 100 million celestial objects. It will also measure the distances to more than a million galaxies. Dr. Kauff-mann`s main interest is to study the physical properties of the galaxies in the survey, such as their masses, star formation rates and histories and metallicities, and compare them to the predictions from the models of galaxy formation she has been developing over the past 10 years.