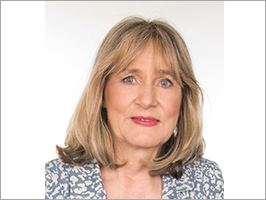 The Deutsche Forschungsgemeinschaft (DFG, German Research Foundation) has a new Secretary General. On Wednesday 1 July 2020, at its session during the DFG's virtual annual meeting, the General Assembly of Germany's largest research funding organisation and the central self-governing organisation of the country's research community confirmed the appointment of Dr. Heide Ahrens, who is currently Senate Director and head of the Higher Education and Research department in the office of the Senator for Science and Ports of Bremen. As Secretary General, Ahrens will be in charge of the DFG's Head Office and serve as a member of the Executive Board, on which her area of responsibility includes the implementation of the budget. She is expected to take office on 1 October 2020.

Introducing Heide Ahrens to the General Assembly, DFG President Professor Dr. Katja Becker emphasised her "in-depth knowledge of all perspectives and interested parties in research management and science policy, her relevant leadership experience at universities and her years of experience in ministerial cooperation between federal and state level", which she noted were decisive in Ahrens' selection.

Born in 1962 in Bergen, Lower Saxony, Heide Ahrens studied political science, communication research, phonetics and modern German literature at the University of Bonn, where she went on to earn her doctorate in 1994. In her first roles as head of section in the policy department at the Alexander von Humboldt Foundation and as programme manager for Programmes & Funding at Stifterverband, Ahrens was already actively involved in research funding.

From 2011 to 2017, Ahrens was a head of section (Ministerialdirigent) and director of the science department at the Schleswig-Holstein science ministry. She has held her current role as Senate Director in Bremen since February 2017, heading the Higher Education and Research department in the office of the Senator for Science and Ports.

"In Heide Ahrens, the DFG is delighted to have recruited a highly experienced research manager as its Secretary General. She satisfies all the requirements for her new role to an exceptionally high standard and will be a tremendous asset to all of us. I am very much looking forward to working with her on the Executive Board," said DFG President Katja Becker after the appointment was confirmed in the General Assembly, which, like all sessions at the 2020 annual meeting, was held by video conference due to the coronavirus pandemic and the continuing restrictions on public life.

Becker also thanked the four heads of department at the DFG Jurij von Kreisler (Central Administration), Dr. Harald von Kalm (International Affairs and Integrative Activities), Dr. Annette Schmidtmann (Scientific Affairs) and Dr. Ulrike Eickhoff (Coordinated Programmes and Infrastructure), who had jointly handled the management of the Head Office on a temporary basis since the end of 2018. "With their high degree of professionalism and tremendous personal commitment, they have made a vital contribution to keeping the DFG's very complex administrative funding activities running smoothly during this time. The value of this is especially clear during the current coronavirus pandemic," added Becker.

A print-friendly, current photo of Heide Ahrens is available on the DFG website at