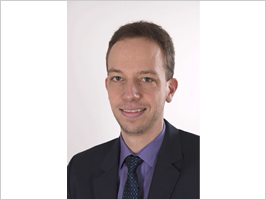 The Deutsche Forschungsgemeinschaft (DFG, German Research Foundation) has selected mathematician Oliver Rinne to receive the 2013 von Kaven Award for Mathematics for his outstanding work on the general theory of relativity and in the related areas of mathematical physics and geometric analysis.

The award, which is worth 10,000 euros, will be conferred for the eighth time and presented on 14 November 2013 at the public Gauß lecture given under the auspices of the German Mathematical Society (DMV) in the Mathematikum Science Museum in Gießen.

Oliver Rinne's research focusses on areas related to the general theory of relativity, one of the pioneering discoveries made by Albert Einstein which, following Newton's classical theory, offers a completely new, geometric understanding of gravity. The Max Planck Institute for Gravitational Physics where Rinne has worked for two years is named after Albert Einstein. The 36-year-old uses a combination of analytical and numeric methods to study Einstein's field equations. Rinne has developed a promising new approach that allows these equations to be handled analytically and numerically stable to infinity, a problem that had long been considered complex and unsolved. His work has also laid the foundations for one of the current methods of handling black holes in numerical relativity theory. He applies his exceptional analytical and numerical abilities to the study of gravitational collapse.

The von Kaven Award is generally presented to early career researchers in mathematics in the Heisenberg Programme to honour outstanding achievements. The decision is made by the DFG's mathematics review board. The prize money of 10,000 euros is provided by the foundation of the same name, which mathematician Herbert von Kaven and the DFG established jointly in 2004. Von Kaven, who was originally from Detmold, died in 2009 at the age of 101. Even at an advanced age, he continued to be interested in the principles of mathematics and throughout his life he was dedicated to promoting research in the field.

The Gauß lecture, at which the award will be presented, is a lecture on mathematics designed to appeal to a wider public with an interest in the subject. This year, the keynote speech will be given by Professor Jürgen Richter-Gebert of the Technical University of Munich on "Symmetry, Ornament and Computers". It will take place on 14 November from 3 pm in the Mathematikum in Gießen.