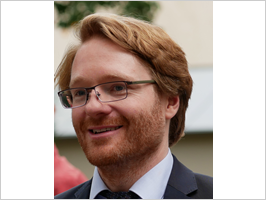 Benjamin Kohlmann approaches literature from a cultural sciences perspective by consistently integrating historical contexts and establishing productive links to his second subject, philosophy. It was with this approach that he examined the political situation of British literature of the 1930s in his dissertation, which was published by Oxford University Press, and discourse relating to the welfare state from the late 18th century to the present day in his habilitation thesis, completed in 2017. The fact that Cambridge University Press has entrusted to him the editing of an anthology on the literature of the 1930s demonstrates that Kohlmann has found international recognition as an expert in this period. Distinguished by its societal relevance, his work brings out the importance of literature to cultural discourses and offers unusual and innovative perspectives through the combination of less canonised texts and a fresh look at more canonised texts.