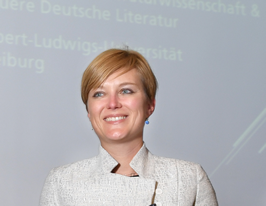 Within comparative literature, Evi Zemanek’s fields of research range from antiquity to the present day. In the field of cultural ecology and ‘ecocriticism’, which investigates literary texts in the context of ecological aspects, she is considered a pioneer in German-language literature studies. In 2012 she established the DFG early career researcher network ‘Ethics and Aesthetics of Literary Representations of Ecological Transformations’, on behalf of which she organised six groundbreaking conferences. Since her dissertation ‘Das Gesicht im Gedicht’ (2010), intermediality research, especially the relationship of literature to painting, photography and architecture, has been another key aspect of her scholarly work. Zemanek is a junior professor of Modern German Literature and Intermediality at the University of Freiburg. In the winter semester 2016/2017 she will serve as an interim professor in the Institute of Media and Cultural Studies.