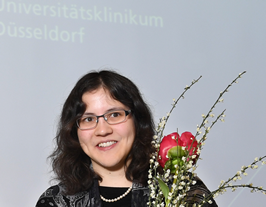 Ute Scholl’s field is the study of hypertension, especially (pre)disposition to this condition due to genetic defects in ion channels and ion transporters. After writing her doctoral thesis on CIC-K chloride channels, which produced a number of highly regarded publications, in her postdoctoral phase she became the first researcher to describe a new syndrome and its genetic basis, which is associated with epilepsy, inner ear hearing loss, ataxia and renal salt loss. Scholl’s research has made a significant contribution to the understanding of the hormonal degeneration processes that lead to secondary hypertension with consequences such as cardiac circulatory disorders or stroke. Since 2014 Scholl has been a junior professor in Experimental Nephrology and Hypertensiology at the University of Düsseldorf. In 2016 she served as deputy spokesperson of the Junges Kolleg of the North Rhine-Westphalian Academy of Sciences, Humanities and the Arts. Her work has won numerous awards, including the Walter Clawiter Prize and the Ingrid zu Solms Research Prize.