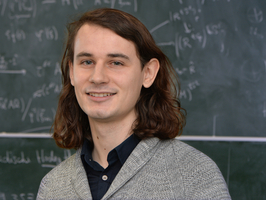 At 27, Peter Scholze is the youngest researcher to receive the Leibniz Prize in its more than 30-year history. Scholze is already considered to be one of the world's leading mathematicians and a rare talent which only emerges every few decades. In recent years he has already answered fundamental questions in arithmetic algebraic geometry which had remained unsolved for decades. This is especially true of his proof of the so-called Langlands conjecture for p-adic local bodies. His theory of so-called perfectoid spaces has dramatically expanded the spectrum of methods in mathematics. These and other aspects of Scholze's work have been praised as both perspicuous and elegant, and have won him the highest recognition throughout the mathematical community.

Peter Scholze studied mathematics in Bonn, where he obtained his bachelor's and master's degrees and in 2012 his doctorate at the age of just 24. In the same year he was appointed by the University of Bonn to one of five chairs at the internationally renowned Hausdorff Center for Mathematics. Scholze thus became the youngest professor at W3 level in Germany, a distinction he still holds today. His incredible talent was already apparent in his early schooldays, when he took part in Mathematical Olympiads. Having received intensive support, he then went on to win several gold medals at International Mathematics Olympiads, which have since been followed by many of the most prestigious prizes in mathematics.