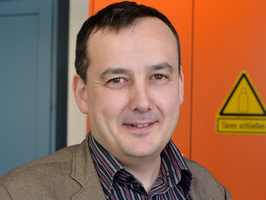 Daniel "Dan" James Frost has been selected for the 2016 Leibniz Prize for his outstanding work in the field of experimental petrology. Frost studies the formation, structure and development of planets by carrying out experiments at extremely high pressures and temperatures. His main interest is in the Earth's mantle and specifically its degree of oxidation, which has a major influence on the Earth's entire water and carbon cycle and the formation of its metallic core and is therefore one of the key parameters of our planet. Researchers had long assumed that the degree of oxidation in the Earth's crust was similar everywhere, but Frost demonstrated that oxidation in the Earth's crust actually depends significantly on depth and that the near-surface mantle is more oxidised in relative terms. This indicates the presence of large amounts of water in the upper part of the Earth's crust. Through this work as well as his research into the formation of the Earth's core, Frost has fundamentally expanded our knowledge of the structure of the Earth and its development over time.

Daniel Frost studied chemistry and geology in London and Bristol and obtained his doctorate in 1995 before going on to do a two-year postdoctoral post in the USA. He has been researching and teaching at the University of Bayreuth since 1997 and was appointed Professor of Experimental Geosciences in 2012. His laboratory at the Bayerisches Geoinstitut in Bayreuth attracts early career researchers from all over the world.