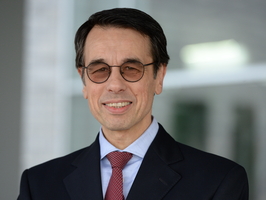 Armin von Bogdandy is one of Germany's most renowned researchers in the field of constitutional, European and public international law, whose oeuvre is of exceptional breadth, depth and diversity in terms of his research interests and areas of work. Possessing extensive training in law and philosophy, he is also a gifted polyglot. In his numerous publications he examines questions such as the role of the executive in the European legislative process, the legal nature of the European Union and the supranationalisation of national law. His work on European constitutional law (Europäische Verfassungsrecht) and the comparative studies which he co-authored with leading researchers from all over Europe (Ius Publicum Europaeum) are standard works. However, von Bogdandy is not only interested in positive law; he also analyses the philosophical and historical origins of law as well as its political and social implications. His examination of key concepts such as constitution, democracy, legitimacy and the public continually influence political and legal debate in relation to Europe. Not least among his achievements is the way in which his work has bridged the gap between the normatively oriented German tradition and relevant US discourses in the study of law.

Born in 1960, Armin von Bogdandy studied law and philosophy in Freiburg and Berlin. He completed his doctorate in law in 1988 and spent time researching in Paris, Rome, Florence and Warwick before habilitating at the Free University of Berlin in 1996. His first professorial post was at the University of Frankfurt am Main. In 2002 he was appointed Director of the Max Planck Institute for Comparative Public Law and International Law in Heidelberg. Since 2001 he has served as justice and in 2006 he became president of the European Nuclear Energy Tribunal in Paris. Between 2008 and 2013 he served as a member of the Scientific Committee of the European Union Agency for Fundamental Rights.