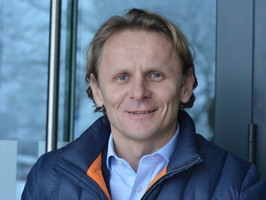 Ivan Dikic has been among the world’s leading researchers in the fields of molecular oncology and cellular signalling for many years. His research deals primarily with the ubiquitin signal molecule, which plays a critical role in the destruction of unneeded cell proteins. Dikic's research led him to the discovery of a new type of ubiquitin receptor, RPn13, the structure and functionality of which he subsequently described in detail. With this and other work, particularly on ubiquitin-binding domains of cell proteins, Dikic made essential contributions to the understanding of fundamental cellular processes such as DNA repair, congenital immunity, and "selective autophagocytosis", the latter of which he was the first to describe. His contributions are also of tremendous importance for medicine, since defects during proteolysis are a factor in a wide variety of illnesses.

Ivan Dikic is a Croatian citizen. He studied medicine in Zagreb and did postdoctoral work at New York University and in Uppsala, Sweden. In 2002 he became a professor of biochemistry at the University of Frankfurt. Since 2009 he has been director of its Buchmann Institute for Molecular Life Sciences and the Institute for Biochemistry II. Dikic is a member of Germany's National Academy of Sciences (Leopoldina) and has received numerous awards for his research, including the German Cancer Prize and an Advanced Grant from the European Research Council (ERC).