Bielefeld professor recognised for science communication contributions in the fields of conflict research, discrimination and violence in society / Award ceremony on 4 July in Mainz 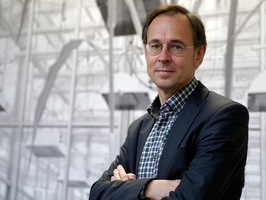 Social psychologist and conflict researcher Professor Dr. Andreas Zick is the winner of this year's Communicator Award, conferred by the Deutsche Forschungsgemeinschaft (DFG, German Research Foundation) and the Donors' Association for the Promotion of Sciences and Humanities in Germany. The 54-year-old researcher from the University of Bielefeld will receive the award, valued at 50,000 euros, for his achievements in communicating his research findings on the causes, forms and consequences of conflicts, discrimination and violence within a society to the media and wider public.

The Communicator Award – Science Award of the Donors' Association has been awarded every year since 2000 and is the most important prize for science communication awarded in Germany. It is presented to scientists and scholars who communicate their research and that of their field in a particularly diverse, original and lasting way to the media and the general public. Through this award, the DFG and the Donors' Association aim to promote the increasingly important dialogue between the scientific community and the public while promoting science communication within the research community itself. The jury, composed of science journalists and communication and PR experts and chaired by DFG Vice President Professor Dr. Frank Allgöwer, chose Zick from 36 applications and nominations in a multi-stage selection process.

Zick obtained his doctorate in Marburg and spent research periods in Wuppertal, Bielefeld, Dresden and Jena before completing his habilitation in Halle-Wittenberg. He has been a professor for socialisation and conflict research at the University of Bielefeld since 2008. Here he co-led the DFG Research Training Group entitled Group-Focused Enmity. He currently contributes to the Bielefeld Graduate School in History and Sociology, which is funded through the Excellence Initiative. Zick has been the Director of the Institute for Interdisciplinary Research on Conflict and Violence at the University of Bielefeld since 2013.

Many of Zick’s research topics are highly relevant and have been the focus of social and political debate over the last few months, e.g. the discrimination of and violence towards ethnic or religious minorities or radical beliefs and violence committed by young people and football fans. Because of this extensive knowledge, Zick himself is often featured in the media, for example in the context of the refugee debate, the Pegida demonstrations or the violent attacks on New Year’s Eve in Cologne. He is also a respected contact person among politicians and authorities. The Communicator Award jury recognises this as an excellent example of the communication of scientific expertise.

From the jury’s perspective, the fact that Zick started addressing these issues prior to recent events, and had been doing so over an extended period of time, and that he considered the communication of his research an important part of his work from the outset is even more important and pivotal to the award. As early as the 1990s, he was writing about the increasing xenophobia in Germany and the emergence and manifestations of prejudices, racism and right-wing extremism in book publications, newspaper reports and journal articles. At approximately the same time, he was also conveying his research to the wider public and to affected target groups, e.g. by developing cross-cultural and anti-racist training programmes.

Andreas Zick is also known to a wider audience through the “ARD-Themenwoche Toleranz”, specials on tolerance aired by a public-service broadcaster in Germany. He collaborated on over 30 programmes for the channel in 2014. Beyond media relations and his busy public speaking and events schedule, he also lends his expertise to a number of committees, commissions and organisations, including the Federal Chancellor’s Experts Dialogue on Germany’s Future, the Council for Migration and the Advisory Committee for the German Forum on Crime Prevention. At the University of Bielefeld, Zick has set up an advisory office for conflicts and violence in football and is involved in the “University without Prejudice” project. He is currently developing a “Science to Action” workshop concept for the Amadeu Antonio Foundation with which early career researchers and practitioners will jointly formulate ideas for better prevention of and intervention in discrimination, violence and criminality.

Zick considers the communication of his research work, and the work itself, to be a campaign for democracy, which cannot be taken for granted. In making this selection, the Communicator Award jury shows its great appreciation for his drive to maintain a civil society, for which Zick has been subjected to personal hostility and threats.

The 2016 Communicator Award will be presented during the DFG’s Annual Meeting on 4 July in Mainz by DFG President Professor Dr. Peter Strohschneider and President of the Donors' Association Professor Dr. Andreas Barner. Andreas Zick is the seventeenth person to receive the prize. Previous winners have included mathematicians Albrecht Beutelspacher and Günter M. Ziegler, marine researcher Gerold Wefer, social researcher Jutta Allmendinger, the glaciology working group at the Alfred Wegener Institute, physicist Metin Tolan and biopsychologist Onur Güntürkün. Last year, paediatric and palliative medicine researcher Boris Zernikow received the prize. The prize money is donated by the Donors' Association, which unites more than 3,000 companies and private individuals who are committed to the promotion of science and science communication. Like all prizewinners before him, Zick will also be presented with a hologram representing the Communicator Award. Created by Cologne-based artist Michael Bleyenberg, the hologram represents the significance of transparency in science and expresses the importance of looking at things 'in the right light'. Like the hologram, it is only then that science can truly shine.