Medical scientist recognised for his dedicated and varied public outreach work on pain, pain therapy and palliative care in children 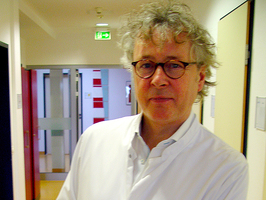 Paediatric and palliative medicine researcher Boris Zernikow is the winner of this year's Communicator Award, conferred by the Deutsche Forschungsgemeinschaft (DFG, German Research Foundation) and the Donors' Association for the Promotion of Sciences and Humanities in Germany. The researcher from Witten/Herdecke University will receive the prize of 50,000 euros for his dedicated and varied public outreach work on pain, pain therapy and palliative care in children and adolescents. The award will be presented on 30 June at the DFG's Annual Meeting in Bochum.

The “Communicator Award – Science Award of the Donors' Association” has been awarded every year since 2000 and is the most important prize for science communication in Germany. It is presented to scientists and scholars who communicate their research and that of their field in a particularly varied, original and lasting way to the media and the general public. Through this award, the DFG and the Donors' Association aim to promote the increasingly important dialogue between the scientific community and the public while promoting science communication within the research community itself. The prizewinners are selected by a jury comprised of science journalists and experts from the fields of public relations and communications. The jury is chaired by DFG Vice President Professor Dr. Frank Allgöwer. A total of 46 researchers working in a broad range of scientific disciplines applied or were nominated for this year's Communicator Award, with Zernikow winning after a multi-stage selection process.

In the view of the jury, Boris Zernikow closely and effectively links science and communication in a sensitive area that is of enormous importance both to medicine and to society as a whole. Through his research and clinical work and also his outreach efforts to present this work to a wider audience, the medical scientist is a pioneer of appropriate pain therapy and palliative care for children and adolescents in Germany.

Born in 1964, Zernikow studied medicine in Münster and at Harvard Medical School. He became a consultant in paediatrics, specialising in paediatric oncology. After a period spent in clinical practice he established the Vodafone Foundation Institute for Paediatric Pain Therapy and Palliative Medicine, of which he is the medical director, at Vestische Kinder- und Jugendklinik Datteln, a paediatric clinic of the private Witten/Herdecke University from which the German Paediatric Pain Centre and Kinderpalliativzentrum Datteln (Paediatric Palliative Centre Datteln) have developed. In 2008 Zernikow was appointed by Witten/Herdecke University to the first chair for paediatric pain therapy and palliative care in Europe. The core research areas of this chair range from multidimensional diagnosis and the neurological basis of chronic pain in children to therapy studies on multimodal treatment and the provision of end-of-life care for children with cancer.

For Zernikow, helping people to understand this clinical research and its results – and not least the need for special treatment and care for children with chronic and life-limiting illnesses – has always been a core aspect of his work. As well as reaching out to the general public and the media, he communicates with specific groups such as healthy and sick children and their families and representatives of healthcare policy and the healthcare system. With all these groups he aims to be an “ambassador” for the needs of seriously and terminally ill children and adolescents, of whom there are approximately 400,000 in Germany.

In addition to this dedicated outreach work, the prize jury was impressed by the variety and creativity of Zernikow's communication activities, which include an animated film called "Understanding Pain – And Coping With It", easy-to-understand guides ("Giving Pain the Red Card") and the websites of the German Paediatric Pain Centre and Kinderpalliativzentrum Datteln. Through communication like this, as well as articles and interviews in the media, in the jury's view Zernikow has brought the issues of pain, pain therapy and palliative care for children and adolescents in Germany into the public eye for the first time.

This year the Communicator Award will once again be formally presented at the DFG's Annual Meeting, which will take place in Bochum on the 50th anniversary of Ruhr-Universität Bochum. It will be awarded on 30 June by the presidents of the DFG and of the Donors' Association, Professor Dr. Peter Strohschneider and Professor Dr. Andreas Barner, at the German Mining Museum. The prize money is donated by the Donors' Association, which unites more than 3,000 companies and private individuals who are committed to the promotion of science and science communication. Along with the prize money, Boris Zernikow will also be presented with a hologram representing the Communicator Award. Created by Cologne-based artist Michael Bleyenberg, the hologram represents the significance of transparency in science and expresses the importance of looking at things 'in the right light'. Like the hologram, it is only then that science can truly shine.