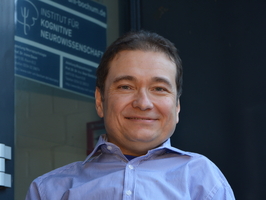 Biopsychologist Onur Güntürkün is the winner of this year's Communicator Award, conferred by the Deutsche Forschungsgemeinschaft (DFG, German Research Foundation) and the Donors' Association for the Promotion of Sciences and Humanities in Germany. Professor Güntürkün, from the University of Bochum, was chosen for his exemplary approaches to communicating his research on the biological foundations for animal and human behaviour to the general public and the media.

The “Communicator Award – Science Award of the Donors' Association” is endowed with 50,000 euros and is the most important prize for science communication awarded in Germany. Established in 2000, the award is bestowed on researchers who have communicated their own scientific findings and those of their peers to a wide general audience. Through this award, the DFG and the Donors' Association aim to promote the increasingly important dialogue between the scientific community and the public while promoting science communication within the research community itself.

The prizewinners are selected by a jury comprised of science journalists and experts from the fields of public relations and communications. The jury is chaired by a Vice President of the DFG. A total of 52 researchers working in a broad range of scientific disciplines applied or were nominated for this year's Communicator Award. After a multi-stage selection process, four of these candidates were shortlisted, with Onur Güntürkün chosen as the winner.

The jury was impressed by the way in which Güntürkün combined high academic quality with a dedication to communication with the public and the media. Born in Izmir in 1958, Güntürkün obtained his degree and doctorate in psychology in Bochum. He has held research posts in Paris and San Diego. He habilitated in Konstanz and was appointed Professor of Biopsychology at Bochum in 1997. His research combines questions, concepts and findings in psychology, biology and neuroanatomy and has made him one of the pioneers of biologically based psychology. One of his main areas of interest is the evolution of thought. Güntürkün has radically modified the established view that the evolution of thought followed a gradual evolutionary path, primarily linked to the development of the neocortex. For example, he has demonstrated that birds with much smaller brains and no neocortex can perform the same cognitive tasks as mammals.

Through his work on the brain and gender, he has counterbalanced traditional views of gender differences. According to Güntürkün, although there are cognitive and neuroanatomical differences between the sexes, they are much less significant than generally believed – in other words, the ways in which men and women think are more alike than is often assumed. However, the biological differences can have a psychological effect resulting in lifelong cognitive differences, as he demonstrated with the example of driving and parking a car. For this and other research Güntürkün has won several national and international awards, most notably the 2013 Gottfried Wilhelm Leibniz Prize presented by the DFG.

He has been communicating his work to the media and the general public for over 15 years. In addition to writing newspaper and magazine articles and broadcasting on radio and television, the jury for the Communicator Award was particularly impressed by the lively and engaging talks he gives to the general public. He takes innovative approaches to science communication through his efforts to optimise the organisation of teaching in schools by contributing important insights from biopsychology. The jury was of the opinion that the school laboratory set up at his own university, largely through his efforts, was especially successful as a science communication initiative, having been visited by over 80,000 school pupils since 2004.

Güntürkün was motivated by a belief that the freedom of research brings with it an obligation to make new knowledge available to the general public in a readily understandable form, which, in the jury's view, corresponds with the aims of the Communicator Award. The jury members were impressed by the way that his personality and engaging style stimulates enthusiasm about science.

The Communicator Award will be presented on 1 July 2014 at the Annual Meeting of the DFG in Frankfurt am Main. The prize money is donated by the Donors' Association, which unites more than 3000 companies and private individuals who are committed to the promotion of science and science communication. Along with the prize money, Onur Güntürkün will also be presented with a hologram representing the Communicator Award. Created by Cologne-based artist Michael Bleyenberg, the work is intended to express the importance of transparency in science. Like the hologram, science is only fully revealed when it is presented in the right light.