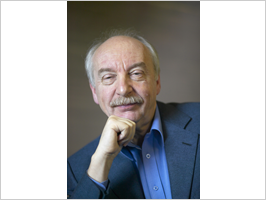 This year's Communicator Award of the Deutsche Forschungsgemeinschaft (DFG, German Research Foundation) and the Donors' Association for the Promotion of Sciences and Humanities in Germany goes to the director of the Max Planck Institute for Human Development in Berlin, Professor Gerd Gigerenzer. The psychologist and risk researcher who is also the director of the Harding Center for Risk Literacy in Berlin, which was newly established in 2008, has been honoured for his skills in communicating key issues such as the art of decision making and dealing with risks and uncertainties to the public.

The "Communicator Award – Science Award of the Donors' Association" is endowed with 50,000 euros and is considered the highest distinction for the communication of research findings in the media and public in Germany. With the award, the DFG and the Donors' Association have been honouring researchers since 2000 who communicate their research to a wide audience in a diverse, original and creative manner and who have rendered outstanding services to the increasingly important dialogue between science and the public.

The prizewinners are chosen by a panel of science journalists, communications and PR professionals which is under the chairmanship of a DFG vice president. As in previous years, the jury had the choice of a variety of high quality, professional applications in 2011. A total of 36 researchers from all scientific fields were proposed for the award. Sixteen candidates were shortlisted, but at the end it was Gerd Gigerenzer who prevailed.

With the 63-year-old risk researcher, the Communicator Award goes to a researcher who, according to the jury, knows how to combine high scientific quality with effective public presentation. After his doctorate and habilitation, Gerd Gigerenzer worked in the psychology department at the Ludwig Maximilian University of Munich, between 1984 and 1990 as a professor of psychology at the University of Constance. After years working at the universities of Salzburg and Chicago, Gigerenzer joined the Max Planck Institute for Psychological Research in Munich as the director in 1995 before becoming the director of the Max Planck Institute for Human Development in 1997. In 2008 he also became director of the newly established Harding Center for Risk Literacy in Berlin.

The issues Gerd Gigerenzer deals with are of great social importance. Through the use of different formats such as lectures, panels, articles in newspapers and journals and book publications, the new winner of the Communicator Award reaches all relevant target groups. His multiple award-winning non-fiction books such as "Reckoning with Risk: Learning to Live with Uncertainty" and "Gut Feelings: The Intelligence of the Unconscious" have been translated into 18 languages.

The jury particularly praised that Gigerenzer does not confine himself to mere information transfer, but pro-actively trains practitioners such as judges, doctors and managers in Germany and abroad in risk communication and decision making. Gerd Gigerenzer is the twelfth prizewinner of the Communicator Award. Amongst the previous prizewinners are the astrophysicist Harald Lesch, the Catholic theologian Hubert Wolf, the palaeoanthropologist Friedemann Schrenk and the Berlin sociologist Jutta Allmendinger.

The Communicator Award will be presented by the President of the Deutsche Forschungsgemeinschaft (DFG, German Research Foundation), Professor Matthias Kleiner, and the President of the Donors' Association, Dr. Arend Oetker, on 5 July 2011 as part of the DFG's annual conference in Bonn. The award money comes from the Donors' Association in which more than 3,000 companies and individuals are committed to the promotion of science and its communication to the public.