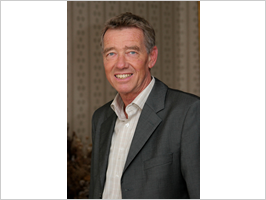 This year’s Communicator Award, which is presented by the Deutsche Forschungsgemeinschaft (DFG, German Research Foundation) and the Donors’ Association for the Promotion of Sciences and Humanities in Germany (Stifterverband für die Deutsche Wissenschaft) goes to cell physiologist and smell researcher Hanns Hatt. The award recognises the professor at Bochum’s Ruhr University for his many years of outstanding communication of his research into both the human and animal senses of smell.

The Communicator Award (“Wissenschaftspreis des Stifterverbandes”) includes prize money of 50,000 euros and is considered Germany’s most prestigious award for the communication of scientific findings to the media and public. Since 2000, the DFG and the Stifterverband have been honouring researchers with this prize, which recognises those who make their research accessible to a wide audience in diverse, original and creative ways and who have earned recognition for their work in improving the increasingly essential dialogue between science and the public.

The prizewinners are selected by a jury which is composed of scientific journalists, communications and PR specialists and headed by a DFG Vice President. Once again, this year’s jury had to choose from a variety of high-quality, professional applications. In total, 47 researchers from all scientific fields applied or were nominated for the prize. Fourteen candidates were short-listed, with Hanns Hatt eventually prevailing.

In the opinion of the jury, the 62-year-old professor for cell physiology is a worthy recipient of the Communicator Award, as he combines high-calibre scientific research with effective public presentation. Hanns Hatt holds doctorates in zoology and medicine and obtained his physiology qualifications at the Medical Faculty of the Technische Universität München. Hatt has held the chair for Cell Physiology at the Ruhr University Bochum since 1992 and became President of the North-Rhine-Westphalia Academy of Sciences and Humanities in 2010.

Hanns Hatt considers himself the “Ambassador of Smell”. Over the past few decades, he has used a variety of different methods to bring the meaning and effects of scent to a wide audience, including, for example, the multi-part ZDF programme entitled “Vom Reiz der Sinne“ ["On the Stimulation/Charm of the Senses"], a range of books and audio books, and hundreds of radio and television presentations and appearances. In 2003, the Bochum researcher achieved his greatest scientific and public success when he discovered that human sperm also possess smell receptors for lily of the valley. His book on the subject, “Das Maiglöckchen-Phänomen" [“The Lily of the Valley Phenomenon“], became an international bestseller. The latest recipient of the Communicator Award has also received numerous accolades from his students for his teaching practices.

In its rationale, the jury emphasised the scope and sustainability of Hanns Hatt’s achievements in the field of communications, as well as his powers of innovation.

Hanns Hatt is the eleventh recipient of the Communicator Award. Previous prizewinners include the astrophysicist Harald Lesch, the Catholic theologian Hubert Wolf, the paleoanthropologist Friedemann Schrenk, and the Berlin social scientist Jutta Allmendinger.

The Communicator Award will be presented by DFG President Professor Matthias Kleiner and the President of the Stifterverband, Dr. Arend Oetker, in Magdeburg, Germany. The ceremony will take place on June 7, as part of this year’s Summer of Science. The prize money is provided by the Stifterverband, an organisation which exists to promote science and its interaction with the public and whose membership includes more than 3000 companies and private individuals. The award ceremony will be sponsored by the Deutsche Kreditbank AG.