“Days of Ukraine in Berlin and Brandenburg” at FU Berlin 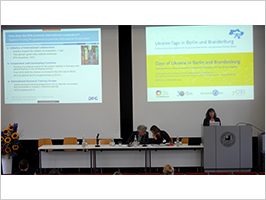 (29.09.21) In mid-September, the DFG participated both online and in person in the “Days of Ukraine in Berlin and Brandenburg”, an event organised by FU Berlin in collaboration with the German-Ukrainian Academic Society to mark the 30th anniversary of Ukraine’s independence and the 70th anniversary of the FU Berlin’s Institute for Eastern European Studies. The academic network conference attended by more than 80 participants from universities, research institutions and science administration in Ukraine and Germany served as an exchange platform for German-Ukrainian cooperation in higher education, science and research.

Welcome addresses were delivered by Maksym Yemelianov (Counsellor of the Ukrainian Embassy), Johann Saathoff (Member of the German Bundestag and Coordinator for Intersocietal Cooperation with Russia, Central Asia and the Eastern Partnership Countries), Gabriele Hermani (BMBF; Head of Division 212 – Cooperation with Eastern Partnership Countries, Russia and Central Asia), Professor Dr. Olga Garaschuk (University of Tübingen and Chair of the Board of the German-Ukrainian Academic Society) and Professor Dr. Verena Blechinger-Talcott (Vice President of FU Berlin).

In other series of talks, successful German-Ukrainian cooperation projects in science and research were presented, as well as aspects of research in the field of Ukrainian studies. The second day of the conference was dedicated to funding opportunities to support German-Ukrainian cooperation in science, research and higher education. In addition to the DFG, the German Academic Exchange Service (DAAD), the Alexander von Humboldt Foundation (AvH), the International Office of the DLR Project Sponsor, the German Research Center for Environmental Health and the National Erasmus+ Office presented funding opportunities for German-Ukrainian research projects.

In her presentation, Mechthild Köhler (DFG) particularly highlighted the DFG’s long-standing and extensive cooperation with its Ukrainian partners: just four years after Ukraine’s independence in 1995, the DFG concluded a memorandum of understanding with the National Academy of Sciences of Ukraine (NASU) which was renewed in 2017 by the presidents of the two organisations, Professor Dr. Strohschneider and Professor Dr. Paton. In collaboration with its partner organisation State Fund for Fundamental Research of Ukraine (SFFRU), the DFG ran a call for proposals in the subjects of mathematics and physics in 2017. The successor to the SFFRU is the National Research Foundation of Ukraine (NRFU), with which the DFG signed a letter of intent in 2020. The DFG supported the founding of the NRFU in an advisory capacity, providing its expertise as an independent science-driven funding organisation.

Between 2016 and 2020 the DFG funded more than 100 Ukraine-related projects, half of which were in the humanities and social sciences. Most of the cooperation partners involved in DFG projects belong to the NASU institutes, but leading universities in the country are likewise involved such as T. Shevchenko National University, National Technical University KPI and V. N. Karazin Kharkiv National University.

The conference was a welcome occasion to intensify contacts between German and Ukrainian institutions and cooperation partners after the coronavirus pandemic and refresh networks. The DFG and its partners hope to be able to further expand existing collaborations and initiate new projects next year through visits to Germany and Ukraine.