(20/12/19) The Fall Meeting of the American Geophysical Union (AGU) was held between 9 and 13 December 2019 in the Pacific coast metropolis of San Francisco. The conference thus returned to its traditional venue for the 100th anniversary of the expert association. Around 25,000 geoscientists from all over the world accepted the invitation to present their research in the field of geophysics and related disciplines at the meeting. Research in Germany was represented at the AGU with a joint booth, a Christmas Career Café and an information event on German research vessels. On the basis of the AGU Fall Meeting, the DFG also organised a Leibniz Lecture followed by a German Social.

Effective cooperation at the joint booth 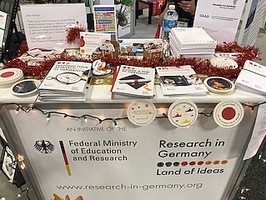 This year’s booth was the ninth to be organised under the umbrella of the initiative of the German Federal Ministry of Research at the prestigious and popular geoscientific conference. Helmholtz Centres, coordinated research programmes and Research Training Groups were also at the joint booth alongside German research funding organisations. The booth thus offered insights into university and non-university geoscientific research as well as graduate training in Germany. Once again, there was no lack of intensive exchange at the joint booth. The booth partners supported each other, referred to one another and helped ensure that the international visitors to the booth received comprehensive information.

The booth participants at a glance:

In addition to the advice offered on a daily basis, two additional special events were held at the joint booth. On 11 December the booth was transformed into a festively decorated Christmas market. Fairy lights lined the edges of the booth, a Christmas tree decorated with tinsel sparkled in the centre and Christmas decorations as well as drinks and cake invited participants to enter into conversation and linger at the individual booth counters. Between 2 and 4 pm additional researchers from German research institutions and alumni of German research funding programmes also made themselves available at five stations within the booth to answer in-depth questions from international partners regarding research and funding opportunities. The two geoscientific Clusters of Excellence Climate, Climatic Change, and Society (CliCCS) and The Ocean Floor were also represented. Despite the fact that Michael Bloomberg, former Mayor of New York and candidate in the Democratic Party’s US pre-election campaign, was delivering a lecture on climate change at the same time, numerous international geoscientists gratefully took up the opportunity to exchange ideas.

On 12 December the Research in Germany booth set the stage for an information event about German research vessels. In celebration of the internationally renowned MOSAiC expedition (Multidisciplinary drifting Observatory for the Study of Arctic Climate) with the German research icebreaker Polarstern, Christian Betzler, University of Hamburg and Scientific Director of the German Research Vessels Control Station, and Stefanie Arndt, Alfred Wegener Institute (AWI) and future participant in the MOSAiC expedition, presented the research vessels Maria S. Merian, Meteor, Sonne and Polarstern and their current operational areas in short presentations. Experts and laymen were equally impressed by the telling images and animated stories about everyday research life on board and continued to talk to the two speakers long after the event.

As in previous years, a Leibniz Lecture organised by the DFG marked the end of the week of Research in Germany events. This time the lecture was delivered by Leibniz prizewinner Falko Langenhorst, University of Jena. At the reception that followed at the local Goethe-Institut, attendees had plenty of opportunity to discuss the lecture, the conference or their own research topics and to network in a harmonious atmosphere.

Research in Germany booth in Japan

This year’s booth at the AGU once again highlighted the strong motivation of the German research community to promote Germany as a research location under the umbrella of the Research in Germany initiative. In the coming year, Research in Germany will be represented for the first time at the conference in Chiba, Japan, which is jointly funded by the Japan Geoscience Union (JpGU) and the AGU. The sight of the well-coordinated booth at the AGU was received by many booth visitors with both a smile and a heavy heart.