Working Together with Europe and the EU

As a political-economic area with free mobility, Europe enables the day-to-day networking of researchers. It is precisely this everyday aspect that requires consolidation of the very best conditions for joint research funding – also in respect to further develop the European Research Area (ERA).

In order to achieve this goal, the DFG works closely with its partner organisations throughout Europe and supports cooperation with Russia and the CIS states through its own office in Moscow. It aims to combine various bilateral and multilateral approaches and levels of research funding as well as enabling cross-border research cooperation in a flexible and science-driven manner to the highest level of quality.

In addition to the governments of European states and the institutions of the European Union, science itself is a driving force and must be supported in its independence. This is why, as a self-governing research organisation, the DFG strives to provide research policy impetus at European level. 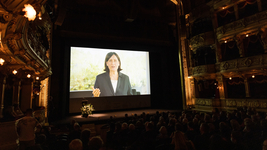 The NCN celebrated its 10th anniversary at the beginning of September with the involvement of high-ranking international attendees. At the festive event, DFG President Katja Becker paid tribute. Interner Linkmore 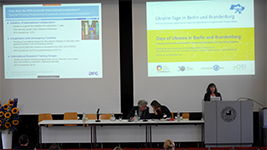 “Days of Ukraine in Berlin and Brandenburg”

In mid-September, the DFG partici-
pated both online and in person in the “Days of Ukraine in Berlin and Brandenburg”, an event organised by FU Berlin in collaboration with the German-Ukrainian Academic Society. Interner Linkmore

Due to the surging numbers of corona infections, the award was symbolically handed over at a video conference on 12.10.2020 to the two winners, Professor Sebastian Faust and Professor Stefan Dziembowski. Interner Linkmore

The regional area at a glance

In order to create the best possible framework conditions for researchers in Europe, the DFG operates on two levels:

While research cooperation, as well as its funding within Europe, is well established, the DFG issues specific calls for proposals with some European partner organisations to fund cooperative research projects. In addition to the established funding collaborations and in order to tap into or intensify further opportunities for cooperation, the DFG organises events geared towards the further development of research activities and capacity building together with partners, especially in Eastern Europe and the former CIS states.

The DFG’s research policy activities in Europe are pursued within three interrelated fields:

As one of the largest funding organisations in Europe, the DFG advocates the strengthening of knowledge-driven research and the diversity of the European research landscape and its national science systems in accordance with the subsidiarity principle. In order to achieve these goals, the DFG works at European level both directly with its European partner organisations and within the institutional framework of Science Europe.

National Contact Points (NCPs) provide information on research and funding opportunities under an agreement between the European Commission and the Member States and the countries associated with the EU Research Framework Programme, currently on Horizon 2020. In Germany there is a network of National Contact Points specialised in the various sub-areas of Horizon 2020. Overall coordination of the NCP system is taken care of by the EU Office of the Federal Ministry of Education and Research (BMBF).

The “European Liaison Office of the German Research Organisations” (KoWi) is the joint service platform of the major German science organisations which are united in the “Association for the Promotion of European and International Cooperation in Science” (Verein zur Förderung der europäischen und internationalen wissenschaftlichen Zusammenarbeit e.V.). As a “research support institution”, KoWi is financed by the DFG, which also chairs the association. KoWi has offices in Bonn and Brussels.

Science Europe is an umbrella organisation of the most important research and funding organisations in the field of basic research in Europe; it is based in Brussels and was founded in 2011. The priority objective of Science Europe is to represent the science-driven concerns and interests of basic research in the further development of the European Research Area (ERA) through direct cooperation with key partners. Based on the competencies of its members, Science Europe therefore seeks to strengthen the cooperation between them and in particular act as the third force in science – alongside the European Commission and the Member States in the European Research Area.

The ERC is an institution established by the EU in 2007 to promote basic research in Europe. The DFG has supported the ERC from the very beginning based on its guiding principles: excellence as the sole eligibility criterion, an independent and transparent peer review process and a “bottom-up” approach that is not restricted in terms of topic areas. As the ERC is a science-driven organisation, its guiding principles are ensured by the Scientific Council, which is made up of internationally renowned researchers. The Scientific Council also defines the guidelines for peer review and funding.

The DFG regards the ERC as a partner in Europe and actively supports its establishment and development. In particular during the build-up phase of the ERC in under the 7th EU Framework Programme for Research (2007-2013), the DFG – as part of the National Contact Point for the ERC – contributed to establishing ERC funding in Germany. The National Contact Point provides information and advice on ERC funding programmes and supports researchers in submitting proposals. Since 2014, in addition to the EU office of the BMBF, the European Liaison Office of the German Research Organisations (KoWi) has performed ERC-NCP tasks.