President of the Notgemeinschaft der Deutschen Wissenschaft from 1936 to 1945 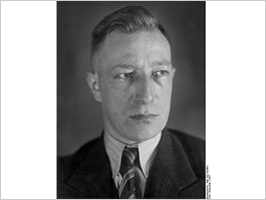 Rudolf Mentzel was born on 28 April 1900 in Bremen. He studied chemistry and earned his doctorate in 1925. Between 1925 and 1926 he managed the laboratory of a Bremen oil company. Until 1933 he worked as an assistant at the University of Göttingen's chemistry institute, where he was involved in the banned development of chemical weapons on behalf of the Heereswaffenamt (Army Ordnance Office).

Although he had not successfully habilitated at Göttingen prior to 1933, Göttingen mathematics professor Theodor Vahlen, also an NSDAP member, facilitated Mentzel's habilitation. His habilitation thesis was apparently so vital to the war effort that it could not be published. In 1933 Mentzel was appointed director of a new department for chemical weapons at the Kaiser Wilhelm Institute for Physical Chemistry and Electrochemistry. In 1935 he was conferred with the professorship in military chemistry, without being required to fulfil any teaching obligations. In 1936, science minister Bernhard Rust transferred to him the presidency of the Deutsche Forschungsgemeinschaft. He served as director of the Reichsforschungsrat (Reich Research Council) in 1937, becoming its vice-president in 1939. In 1939, Mentzel became head of the Office for Science in the Reich Ministry of Education. In 1941 he was appointed second vice-president of the Kaiser Wilhelm Society.

On 2 May 1945, Mentzel fled with Rust to Schleswig-Holstein, where he was captured and interned. As part of a denazification programme he was sentenced to two and a half years' imprisonment, which was offset against his period of internment. He later worked in industry. Mentzel died in 1987.