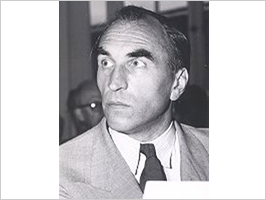 Ludwig Raiser was born in Stuttgart on 27 October 1904 and studied law and political science at Munich, Geneva and Berlin. From 1927 to 1930 he worked as a research assistant at the Kaiser Wilhelm Institute of Foreign and International Private Law in Berlin-Dahlem, where he gained his doctorate in 1931 and his habilitation (venia legendi) in 1933. Since he was denied an academic career "due to political unreliability" (Munzinger-Archive), he initially practised as a lawyer and in 1937 joined the board of the insurance company Magdeburger Rückversicherungs-AG and Magdeburger Feuerversicherungsgesellschaft. In 1942, during the Second World War, he received a call to the University of Strasbourg, but was soon afterwards drafted into the German army. From 1943 he served as a Military Administrative Councillor in the "Wirtschaftsstab Ost" in Berlin (administration of trust holdings of businesses and enterprises in areas close to the front). In 1945, he became Full Professor of Civil, Commercial and Business Law at the University of Göttingen. From 1955 to 1973, Raiser taught and researched at Tübingen, where he died on 13 June 1980 at the age of 75.

Grand Cross of the Order of Merit of the Federal Republic of Germany (Großes Bundesverdienstkreuz) in 1955 and 1964, Theodor Heuss Prize (1967), Honorary Senator of the Technical University Darmstadt, Freiherr vom Stein Prize (1976)