President of the Notgemeinschaft der Deutschen Wissenschaft from 1934 to 1936 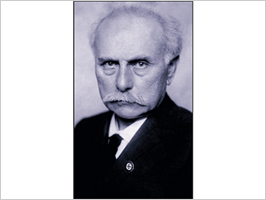 Johannes Stark was born on 15 April 1874 in Schickenhof. He studied physics in Munich, where he earned his doctorate in 1897. He completed his habilitation in 1903 and subsequently held professorships in Hannover, Greifswald, Aachen and Würzburg. He won the Nobel Prize in Physics in 1919 for his discoveries in optics, electrodynamics and quantum mechanics.

Stark resigned his professorship at the University of Würzburg in 1922 following internal university disputes and used his Nobel Prize money to establish a private laboratory.

Stark joined the NSDAP in 1930, and because of his political views he was appointed president of the Physikalisch-Technische Bundesanstalt (Imperial Physical Technical Institute) in 1933. In 1934, science minister Bernhard Rust transferred to him the presidency of the Deutsche Forschungsgemeinschaft. He was forced to give up this role in 1936 after losing power struggles in the governmental apparatus and because his poor handling of the office could no longer be sustained.

Stark was a leading figure in the "German Physics" movement, a nationalist movement within the German physics community in the early 1930s. He coordinated smear campaigns against Werner Heisenberg, Albert Einstein and other representatives of modern physics, vilifying them as "white Jews in science".

After the end of the war, a tribunal sentenced Stark to four years in a labour camp as an active representative of "German Physics". In an appeal process in 1949 he was graded as "less incriminated" and ordered to pay a fine. He died at the age of 83 in Traunstein.