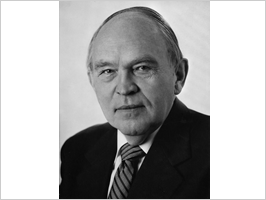 Eugen Seibold was born in Stuttgart on 11 May 1918 and studied geology at Bonn and Tübingen. He received his doctorate in 1949 and his habilitation (venia legendi) in 1951. After several years of employment as a reader, he became Professor of General and Applied Geology and taught at the University of Tübingen from 1953 to 1958. From 1958 onwards Seibold worked as Full Professor and Director of the Geological-Palaeontological Institute at the University of Kiel. Since 1985 he has also held Honorary Professorships at the Tongji University Shanghai and the University of Freiburg/Br. Eugen Seibold died on 23 October 2013.

Additional Information on the Eugen and Ilse Seibold Prize :