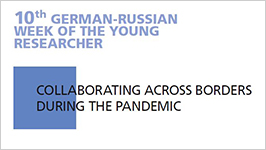 (05.10.21) For ten years now, the DFG and its Moscow office have organised the “German-Russian Week of the Young Researcher” to focus specifically on bilateral networking and promote early-career researchers in Russia. The 10th anniversary week took place in December 2020 and was dedicated to current challenges facing cross-border research cooperation as well as the new role of science in society at large. The events are organised jointly with the German Academic Exchange Service (DAAD) under the umbrella of the German House for Research and Innovation (DWIH Moscow). At the opening, the approximately 200 participants were welcomed by the directors of the two lead organisations, the DFG and the DAAD, as well as the envoy at the German Embassy in Moscow.

Given the restrictions, the week was reduced for the first time to a one-day virtual event divided into two sections. The online event was opened by DFG President Professor Katja Becker and featured a keynote speech. Subsequent contributions by the Russian Foundation for Basic Research (RFBR) and the Russian Science Foundation (RSF) addressed the current and future impact of the pandemic on research and the response of the three research funding organisations to the outbreak of the pandemic. In the second section, “German-Russian Research Collaboration during the Pandemic”, ongoing research projects run by DWIH Moscow support organisations were presented.

Now firmly established, the event series was originally launched in 2011. The first Week of the Young Researcher was dedicated to the German-Russian Year of Research, Education and Innovation and opened a new chapter in bilateral cooperation by focusing specifically on early-career researchers involved in research cooperation between the two countries. This was followed by annual events on current research issues which were held in various Russian cities.

In spite of the ongoing pandemic and the limitations this involves, the plan is to continue the event series this year with the eleventh Week of the Young Researcher so as to enable academic exchange between our two countries to continue.

The 2020 conference brochure is available for download on the DFG homepage.