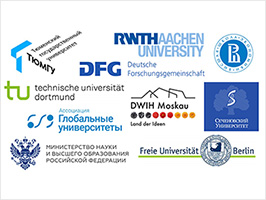 (23.02.21) The Russian “Association of Global Universities” and the German Centre for Research and Innovation (DWIH) Moscow organised a German-Russian exchange involving more than 100 participants on the subject of a new Russian funding programme geared towards promoting the formation of clusters and consortia at universities in Russia. The DWIH and its supporters such as the DFG along with RWTH Aachen University, TU Dortmund University and the Free University of Berlin reported on the funding line and foundation of excellence clusters in Germany.

In mid-February, the DFG office in Russia took part in the online expert seminar “Science Clusters at Universities: Structure and Success Models”, which attracted some 100 registrations from Russia and Germany. The seminar was organised by the Association of Global Universities, whose membership comprises 21 leading Russian universities, and the DWIH Moscow. The focus of the exchange between the participants from the two countries was the respective national funding measures and concepts for the formation of scientific clusters.

In Russia, the new funding programme “Priority 2030” is currently being developed to improve the competitiveness of Russian universities, aiming to strengthen and support the establishment of consortia at universities and research institutes with companies in the business sector. It follows on from the government’s highly successful funding programme “Project 5-100”, which ended last year: this aimed to raise at least five Russian universities into the top 100 of the world’s leading university rankings by 2020.

An introductory lecture on the general orientation of the new funding programme was followed in the first section of the seminar by presentations from Russian university consortia such as the “Interdisciplinary Research Centre for Human Resources” at Moscow Higher School of Economics. There were also presentations by the networks “Digital Biodesign and Individualised Healthcare” based at Sechenov University Moscow and Tyumen State University’s “West Siberian Interregional Science and Education Centre”.

The second session of the seminar was dedicated to the presentation of the German excellence strategy and the clusters of excellence funded in this connection. The head of the DFG office in Russia, Dr. Jörn Achterberg, briefly introduced the topic and referred to the DFG’s online guidelines on the establishment and funding of clusters of excellence in Germany. This was illustrated by presentations given by existing German research networks at RWTH Aachen University (“Internet of Production”) and the Free University of Berlin (“Temporal Communities: Doing Literature in a Global Perspective”) as well as the competence centre “Energy - System - Transformation” at TU Dortmund University.

At the end of the seminar, the organisers and the participating Russian and German universities emphasised their common interest in international cooperation through larger research networks and declared their intention to continue the exchange in a similar format. The Russian Association of Global Universities was founded in February 2014 to increase the international competitiveness of its member universities. The association includes all the 21 Russian universities that received total funding of approximately €1.25 billion under the “Project 5-100” programme from 2013-2020.