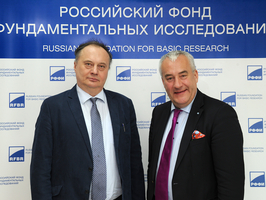 (28.03.17) On 17 March, DFG Moscow accompanied a research delegation of the Bavarian Minister of State for Education, Research and Art, Dr. Ludwig Spaenle, to a meeting with representatives of the Russian Foundation for Basic Research.

In addition to representatives of the ministry and the German embassy in Moscow, the delegation included the President of the Bavarian Academy of Sciences and Humanities, Prof. Dr. Thomas Höllmann, the Rector of the University of Würzburg, Prof. Dr. Dr. h.c. Alfred Forchel, and the managing director of the Bavarian Academic Center for Central, Eastern and Southeastern Europe (BAYHOST), Nikolas Djukic. The purpose of the meeting was to present Bavarian research institutions and sound out potential for future collaboration.

A delegation from the Bavarian minister of state first made an official visit with the board of BAYHOST in March 2016. During that visit the focus was on talks with the new funding organisation, the Russian Science Foundation, and the council of rectors of universities in Moscow and the surrounding area.

The Russian Foundation for Basic Research is one of the DFG’s most important partner organisations. For over 20 years, the DFG has been maintaining close links with the RFBR and the two organisations have provided joint research funding on an annual basis, this year for the first time in the form of a call.